Link copied to clipboard
Home Services Global Team Augmentation Blog Trends The tech talent shortage in 2023: How to navigate through the crisis

The tech talent shortage in 2023: How to navigate through the crisis

The tech talent shortage has been an issue for years, first accelerated by the COVID-19 pandemic when an estimated 4.5 million American workers quit their jobs. The Harvey Nash Group Digital Leadership Report states that 4 out of 10 businesses can't keep their key employees as long as they used to because they're being lured away by other companies. But why?

As the popularity of remote work grows, employees now have a much higher probability of finding work that meets or exceeds all of their expectations since location is no longer the deciding factor. To a certain extent, employees are the new decision-makers: they have shifted the paradigm of how the employment market operates. As a result, new recruitment and HR practices need to include compelling incentives to entice the best of their field.

All things considered, the fight for talent is becoming a much greater challenge than it was just a few short years ago. If the talent gap continues to grow, tech businesses will no longer be able to maintain a competitive advantage, and global digital transformation efforts risk stagnation.

There is still no major indication that the tech talent shortage will come to an end. Indeed, data shows that it will only gain further momentum in the upcoming years. Here are some stats to back up this statement: 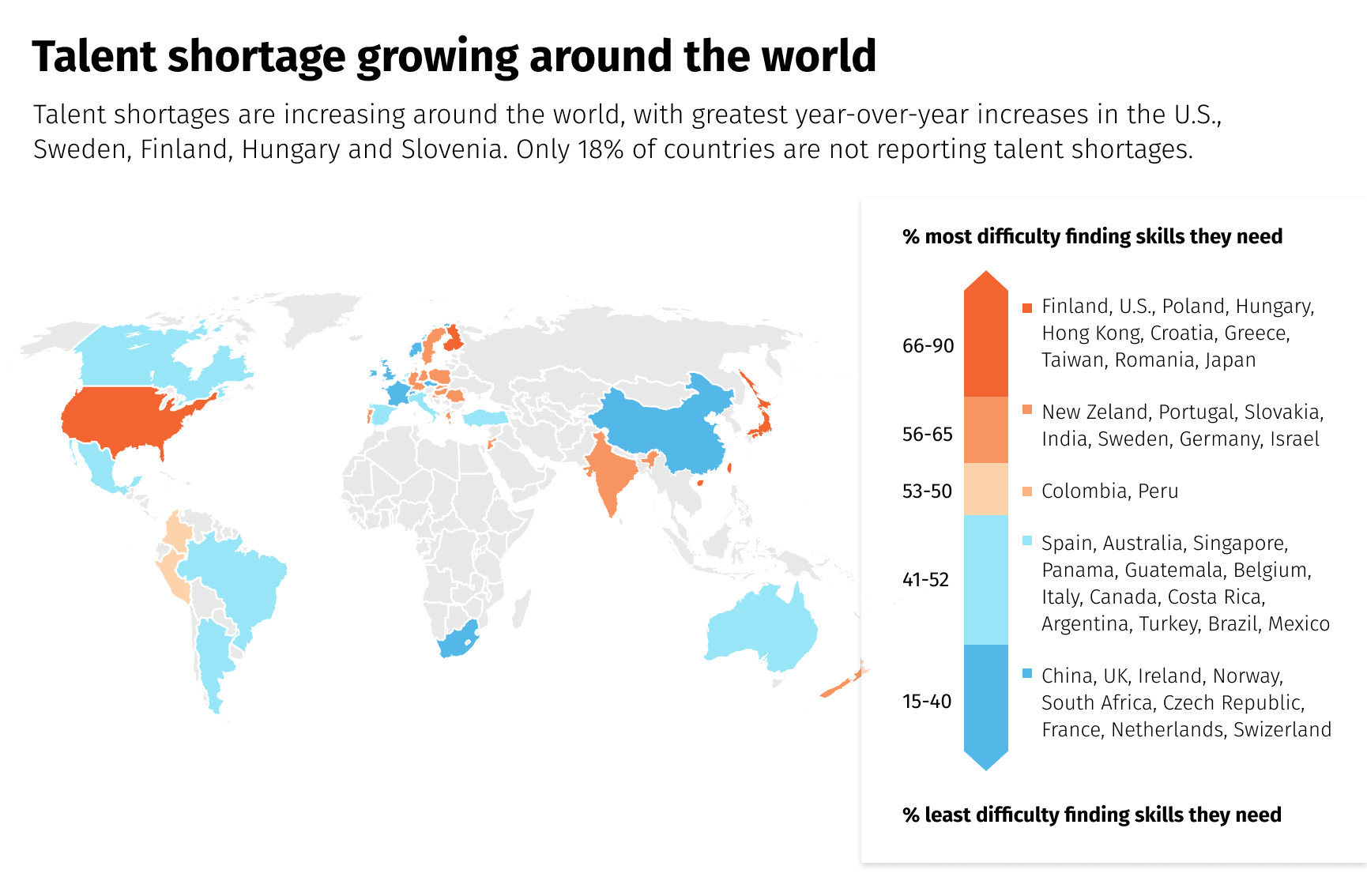 A word from industry leaders

A new McKinsey Global Survey suggests that the increasing number of companies are either already experiencing a lack of well-trained employees or will face skills gaps within the next few years. 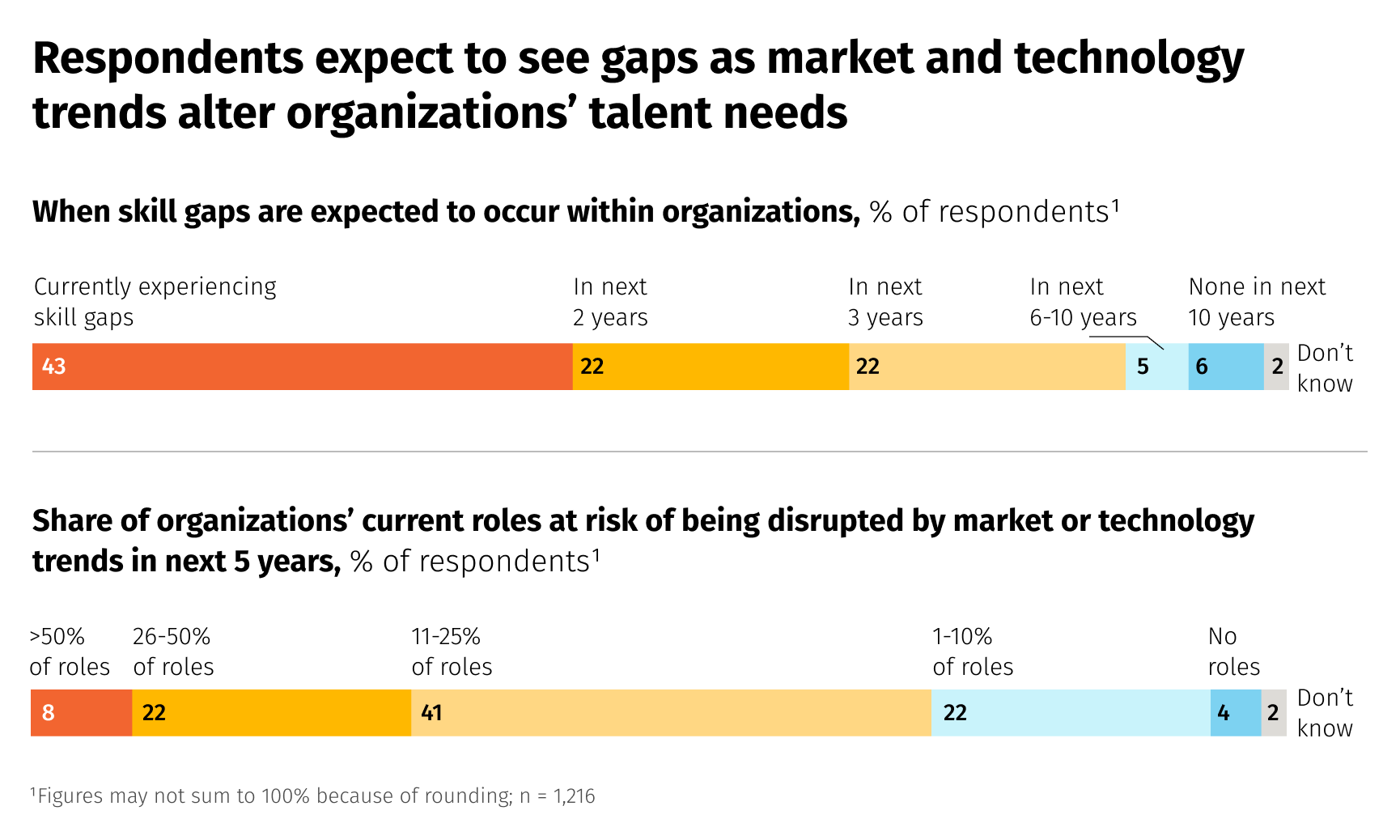 In short, nearly 87% of all surveyed companies say they have already experienced a talent shortage or expect to be facing one in the next few years.

Most companies believe it is high time they address the skill gaps in different business areas. As of now, there is a great need for well-trained experts in data analytics, IT management, and executive management. 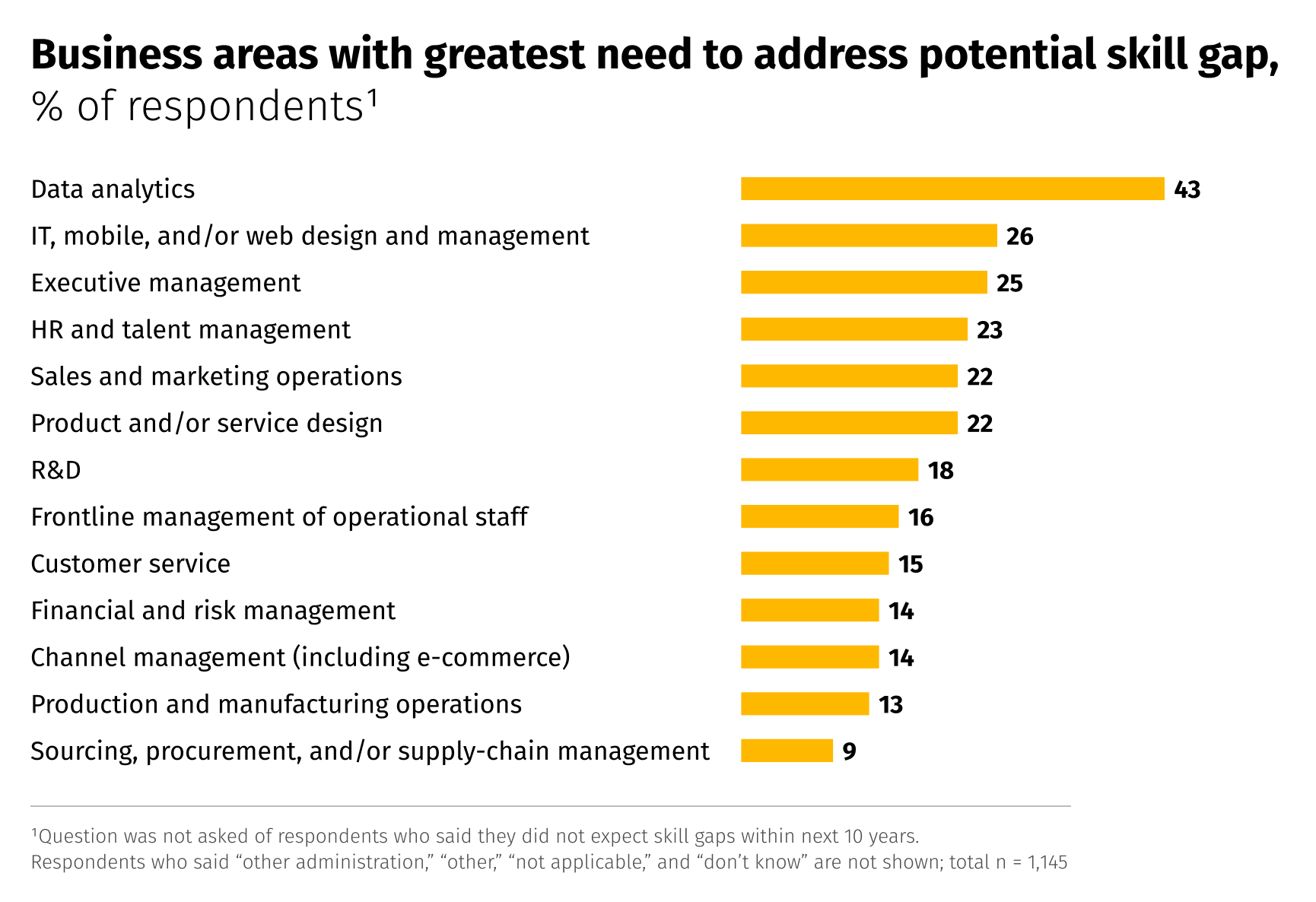 The Great Resignation is a term that first emerged in the US in response to the growing shock over how many American workers were quitting their jobs during the pandemic. There are currently more than 918,000 open vacancies in the US - the highest number ever. These numbers are expected to grow by 22% in the next seven years. The Bureau of Labor Statistics reports that the overall developer shortage will reach a staggering 1.2 million by 2026. This growing talent shortage caused an unprecedented rise in developers' salaries - a median developer now makes around $110,140 per year, much more than previously. In these circumstances, it is even more challenging for startups to compete with big, well-known corporations. Small and medium-sized businesses sometimes don't have significant expenditures, so they can't recruit skilled staff and keep operating efficiently.

In Scandinavia, people are all too aware of the lack of engineers and how it stifles progress and innovation. The Nordic countries currently train 5000 engineers annually on average, a modest quantity compared to the rest of the globe. Ingeniørforeningen IDA projects a 13,500 engineer deficit in Denmark by 2025, which will only exacerbate the issue. In Norway, a 10,000-person shortfall is anticipated by 2030. These numbers are standard for the other countries in the region.

As the US suffers from a considerable talent shortage, they've started to outsource software development services, mainly to the LATAM region. These countries have stepped up to the challenge and provided the necessary human resources. Unfortunately, this rising demand has resulted in a skill gap for LATAM's local and regional needs.

Over 70,000 new IT professionals are needed in Brazil alone each year, but only about 45,000 are trained. As a result of the region's talent shortage, salaries for IT professionals increased by 20% to 30% last year.

The pandemic pushed the rapidly expanding IT industry in the EU market even further into scarcity. Cybersecurity, automation, and the need for digital transformation are the main driving forces behind this. Nearly all IT professions are listed as having "shortages of substantial size" in the European Commission's Analysis of shortage and surplus occupations.

According to a Eurostat analysis, the lack of qualified workers makes it difficult for more than 50% of European Union businesses to find IT employees. More than 124,000 jobs are currently unfilled in Germany alone, while Hungary is short about 30,000 developers.

The demand for developers is the highest among all software-related occupations, according to the European Software Skills Alliance (ESSA). Currently, the most popular programming languages are Java, Javascript, SQL, HTML, PHP, C++, C#, and Python. 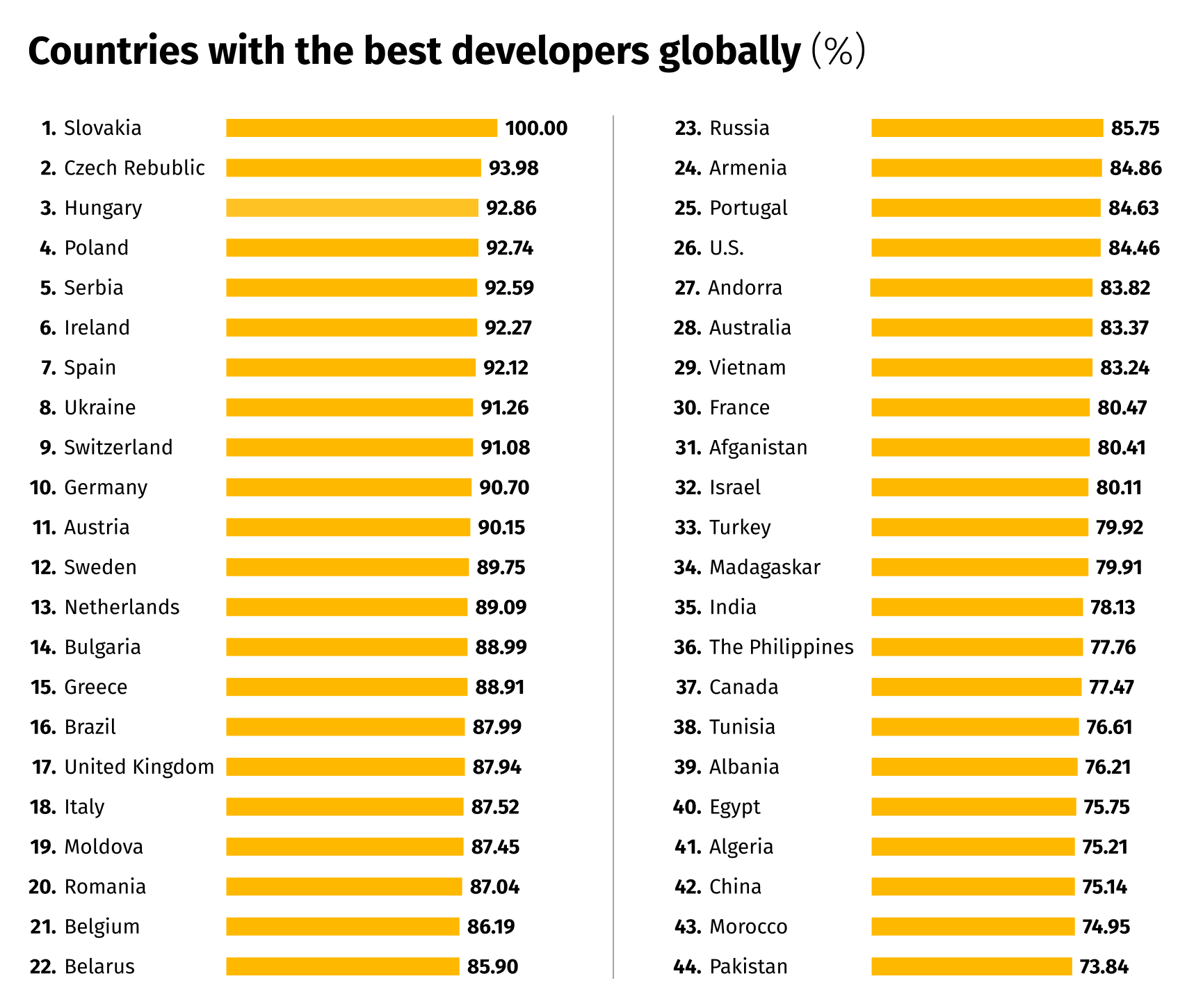 A severe talent shortage of 2.0 million technology, media and telecom employees, at an annual opportunity cost of more than $151.60 billion by 2030, might impede technological growth across all sectors of the Asia Pacific economy.

Due to the lack of local expertise in the tech sector in Southeast Asia, many governments and organizations are now hiring foreigners for tech engineering positions. The majority of India's tech developers, who are noted for their talent in the field, continue to go to Southeast Asia or other regions of the world in search of better employment opportunities. Notably, however, businesses in India have enhanced their employment opportunities to keep staff and prevent a labor shortage. India now has over 1.67 million app developers, and by 2024, it will surpass the US and the EU as the country with the highest concentration of developers.

Despite this, a recent survey by DigitalOcean Holdings revealed that India's developer skills shortage might eventually worsen. India has already made significant investments in its technology sector and is encouraging foreign IT businesses to locate their hubs by providing them with training and other benefits.

Given the significance of these positions in any business, a lack of talent, particularly among developers, could cause the nation to face a significant vacuum that will need to be filled in the future.

The impact of tech talent shortages

Businesses are being forced to spend more money on salaries and various employee incentives in order to attract and retain the few skilled workers available. As a result, small businesses cannot compete effectively with large corporations. A shortage of software developers has had a negative impact on product performance and innovation. For example, if a company cannot hire specialists for difficult-to-fill positions, their work output will begin to suffer. Hard-to-fill job openings include those that require some level of expertise, and at least two years of experience. According to an Indeed survey, hiring Senior programmers and full-stack engineers is a difficult task for more than 80% of recruiters.

The lack of software engineers is hindering corporate growth. These days, more businesses are switching to cloud-based operations, but they are still finding it difficult to advance past the stage of adopting technical trends for survival when there is an industry deficiency.

A scarcity of software developers is an alarming challenge that impacts operational performance from the get-go. Overworked employees risk burnout and issues with morale, and the quality of their work can suffer as they look for better work opportunities. Eventually, the company falls short of its objectives and customer expectations aren’t met. This might lead devoted clients to look at other options to meet their needs.

So, what can be done to overcome this business challenge that is stalling digital transformation and posing a significant risk to the global economy?

As many as 350 developers responded to Stackoverflow's recent survey on "What makes developers happy at work" in March 2022, and the top three factors they cited were:

These criteria can be used as cues to assist organizations in tailoring their plans to suit their employees' needs.

When the company is at its peak, and demand is rising, better salaries and benefits packages are always smart moves. This remedy, however, does not necessarily work for small, newly established firms.

It's hard to hire local programmers as businesses compete for high-quality talent with large tech companies. Plus, finding engineers with the exact skills needed for the project's success is even more challenging. According to the Reveal Survey Report: Top Software Development Challenges 2022, recruiting developers with the right skills is the number one challenge companies face today.

Continuous learning improves the outcomes of any reskilling effort. Companies should structure the learning journey to help employees retain and apply new skills. The reskilling curriculum should include both in-person and digital learning capabilities. Employees should be assigned to train in groups with similar experiences and should be involved in projects that allow them to practice skills as they learn.

To sum it up

What is clear is that an organization's purpose, values, employee experience, and culture will be critical when dealing with developer shortage - as will the sophistication with which these elements are demonstrated. Simultaneously, prospective employers must look beyond traditional recruitment and retention methods to attract a larger pool of diverse talent required to compete successfully in this new era.