Percentages of websites using Java broken down by ranking, according to W3Techs report, 30 June 2020.

In countries like Germany, Java is still at the top, according to the PYPL Popularity of Programming Language Index.

Famous companies that use Java in their tech stack
Source: StackShare

Major companies like Uber, Pinterest, Google, Instagram, Spotify, Netflix, and Airbnb use Java in their tech stack, making it an important tool in the function of your everyday activities.

Java is a widely-used programming language for:

According to a recent survey conducted among developers who use Java as one of their main programming languages, Java was mostly used to develop websites (39%) in 2021, as well as utilities-related software (26%), system software (19%), and finance-related software (16%) among others.

How to Hire Java Developers? A Recruiter’s Perspective

There are numerous resources that can help you hire the right Java developer for your project-based managed service, short- and long-term freelance project, dedicated developer or remote development team.

Your best solution is to team up with a reliable service provider. Many companies are turning to offshore destinations to staff tech professionals because it saves time and money.

Working with a remote team allows you to find the most qualified and experienced IT specialists at a better price.

Service providers have an individual approach to each client’s needs and a deep understanding of the market, which can otherwise prove to be a headache for companies.

Grid Dynamics is one of the most experienced and reliable outsourcing companies in Eastern Europe. With offices in the major tech regions - Eastern Europe, Central Europe and Latin America - we provide necessary infrastructure, as well as client, developer, and administrative support.

A CV is a great source for the initial screening of your candidates, yet information given on a CV can be limited. For example, some of the candidate’s projects may fall under the protection of NDAs, while pet projects, personal experiments, or something that is not directly related to the developer’s job might not be included at all.

Moreover, you shouldn’t reject a candidate only because you think 2 years of experience isn’t enough for your project. Some developers can gain vast hands-on experience in various technologies and domains in just a year, while others can spend 5 years working on a single project with a limited tech stack.

Once you find a handful of interesting-looking Java developers, you need to screen the candidates and figure out which are the best fit for your team.

Recruiters try to discern a variety of deciding factors during an interview, such as:

Just as important as technical skills are a developer’s social skills. Are they a good communicator? This usually suggests whether or not they are a team player.

Does your prospective Java developer seem proactive? You want a candidate who is not only a team player but someone who knows how to work hard and get the job done.

Knowledge of English is extremely important for remote teams of Java developers that communicate with clients worldwide.

As it turns out, 47% of developers in Ukraine speak fluent English. About 12% of software engineers use advanced English on a daily basis.

A developer should have some familiarity with their prospective company and its work culture, in order to integrate fully with the rest of the team.

Thankfully, Grid Dynamics’s Extended Team Model offers a deep level of integration between clients and developers, so it’s easy to preserve your company culture when hiring a remote team of Java developers.

To start with, write down a list of the most important questions and topics you want to cover with your candidate. In addition, you can draft possible answers to those questions to get prepared for any follow-ups.

Instead of simply asking questions, prepare to answer some too. If a candidate doesn’t have any questions about the project or your company, chances are that they simply aren’t that interested in working with you.

If you like the candidate, don’t take too long to make an offer. The majority of skilled Ukrainian developers interview for 3–4 jobs simultaneously, so make the call before your competitors do.

The average salary for Java developers in the US

In Germany, Java developers earn $49,038 annually, while their counterparts in Canada have an average salary of $55,140 per year. In the Netherlands, Java developers are paid $46,170 annually. 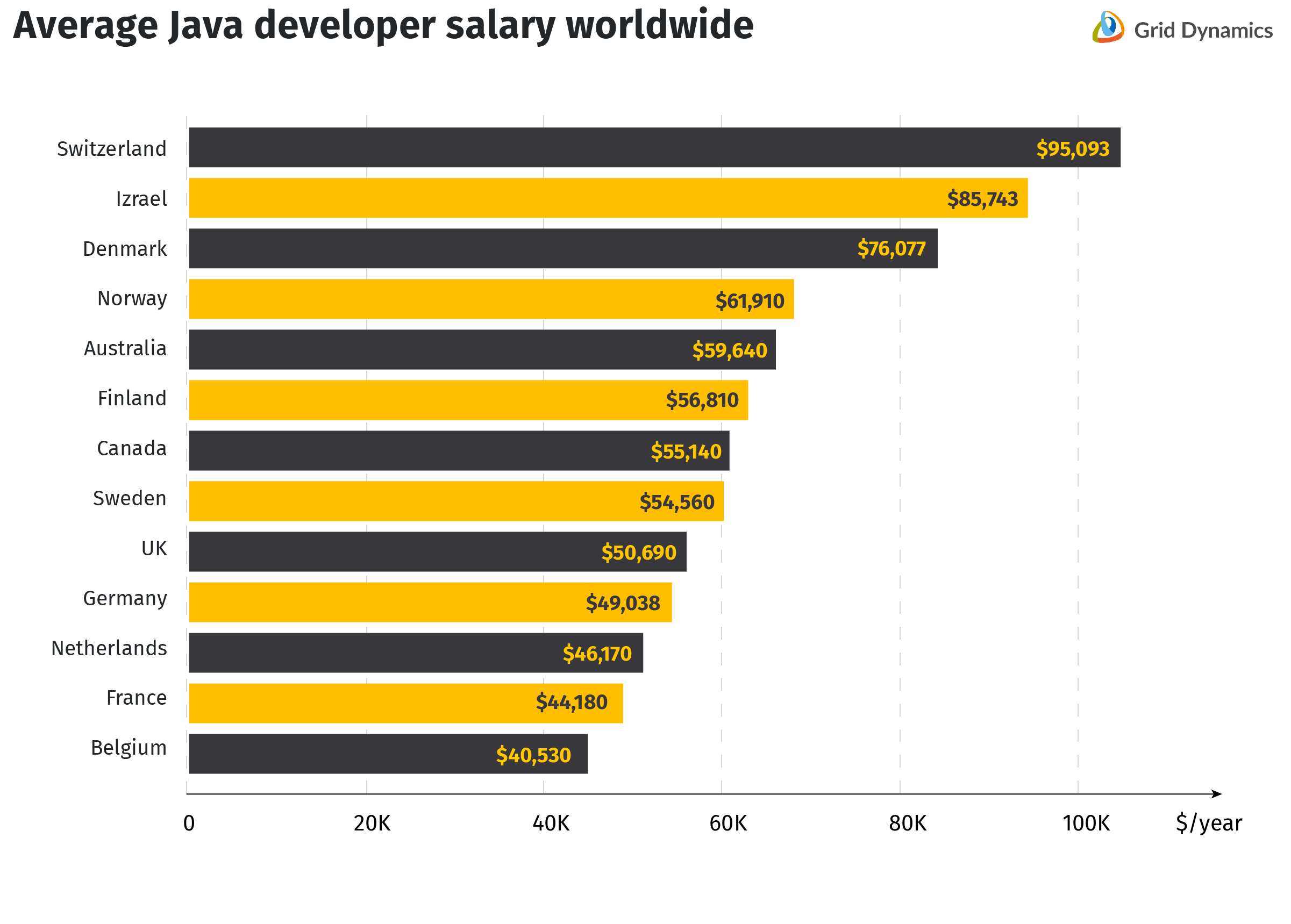 The average salary for a Java developer can very depending not only on location, but level of experience as well.

Average Pay of Java Developers Depending on Level of Seniority

How Much Does It Cost to Hire Java Developers?

Hiring remote Java developers with Grid Dynamics, by contract, you won't have to worry about getting to know the employment tax system in a country since we take care of all the administrative issues.

Number of Java Developers in the World

*The numbers provided above may be incomplete and only represent a general tech talent distribution across the world.

The Number of Java Developers 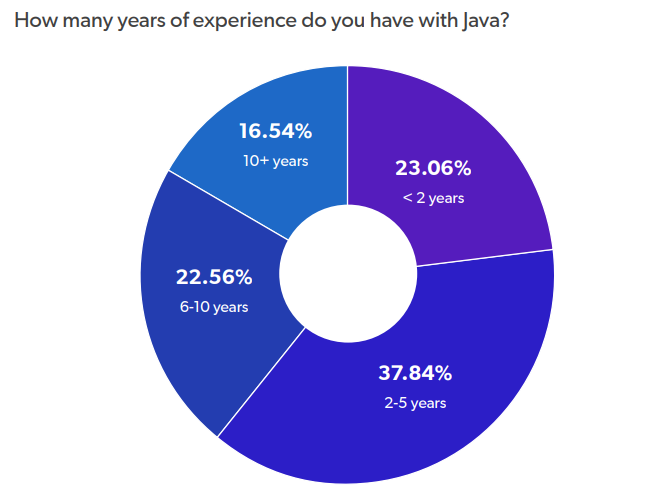 According to the 2020 Java Developer Productivity Report, the majority of Java developers have 2–5 years of experience.

According to Google Trends, Ukraine has the highest index of interest in Java development — 88. The Netherlands comes next with a score of 77. Germany, Belgium, and the USA follow with 73, 72, and 71 points. 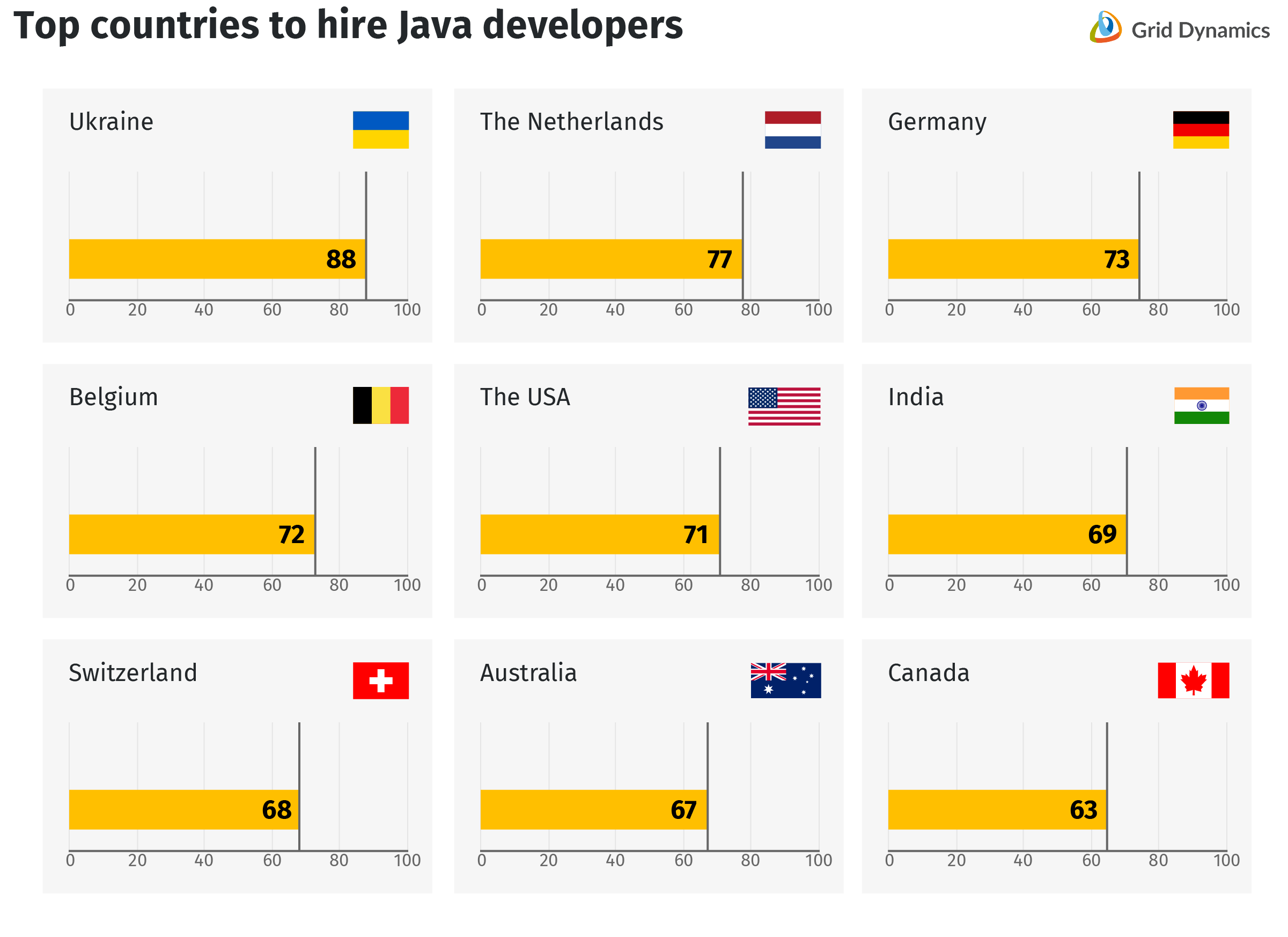 Why Hire Java Developers in Ukraine

With a pool of 250,000 software developers, Ukraine is considered to be one of the leading global outsourcing destinations.

When working with Grid Dynamics, you can hire the best remote Java developers. You'll take an active part in every stage of the selection process and interview the candidates in person.

Other benefits of our model are: