IT Outsourcing to Latin America: All You Need to Know

Outsourcing software development is a long-standing trend in the IT industry. While many companies take the well-trodden path, moving their business operations to India or China, others are thinking about sourcing talent a little closer to home.

In recent years, some South American countries have been pushing to be seen as serious IT hubs by creating and expanding their technological infrastructure, promoting computer education, offering incentives for business, and supporting startup activities. This has enabled Latin America to grow its reputation on the global tech scene and become the top outsourcing destination for Western companies.

This article features insights into the region’s tech ecosystem and provides an overview of its top-trending tech destinations so that you can assess their potential for outsourcing partnerships.

Outsourcing to Latin America: 4 Reasons to Do It Now

Latin America has been hailed as the best location to outsource software development by US and Canadian tech companies. Many businesses from North America choose the region as their primary destination for specialized information technology services due to close travel proximity, highly qualified talent, favorable business conditions, and cultural similarities. Let’s take a closer look at the perks the region has to offer:

Due to the growing talent shortage, many American companies are struggling to find seasoned tech professionals at home and often look beyond their borders to fill their IT needs. With roughly 1 million developers, Latin America definitely has talent to hand.

The region’s talent pool comprises software engineering alumni, boot camp graduates, and coding academy participants. Thanks to a multifaceted tech education system, LatAm is overflowing with tech specialists who have a solid knowledge of multiple programming languages and are prepared to handle any engineering challenge.

In addition, independent and government programs encourage tech organizations and businesses to employ interns. So by the time they receive their degree, local students may have up to five years of corporate work experience. Such diversified skills training allows LatAm engineers to master all aspects of the software development process and to provide clients with a wide range of services.

Latin America is gaining popularity as a robust technological hub that supports innovation and entrepreneurial endeavors. According to the Doing Business 2020 report, the region’s average score for economic performance and regulatory environment was 59.1, with Mexico leading the way at 72.4 points.

Latin America’s supportive business climate coupled with financial attractiveness and digital agility are the top reasons why more and more businesses are turning to the region for their outsourcing needs. Based on the Kearney Global Services Location Index (GLSI), the most promising countries are:

To develop a positive offshoring landscape, several LatAm countries have also enhanced their tax systems. These initiatives have not only granted tax breaks to international businesses, but also enabled the free circulation of foreign money.

An increasing number of global companies are becoming aware of the lucrative incentives the region offers and turning their glances to South America as their primary location for outsourcing tech operations. Some of the tech giants that have already made the switch include Amazon, Microsoft, Intel, Netflix, and Github.

The favorable business environment, combined with the abundance of a highly qualified workforce, has spurred a flurry of startup activity in LatAm. The region’s booming tech ecosystem went from 2 to nearly 50 unicorns in less than five years. In terms of unicorn breeding, Brazil is the indisputable leader (60% of companies), with Mexico (17%) and Argentina (11%) following next.

Leaving aside the current unicorns, Latin America can boast around 100 startups that have reached a valuation of $100+ million. With more capital being pumped in each year, Latino countries comprise the fastest-growing region in the world for venture funding. The number of tech startups in the area has grown almost six times in value, increasing from $38B to over $216B over the past couple of years.

Time zone difference is commonly overlooked when it comes to software development outsourcing. However, it’s a vital factor for seamless and continuous communication, quick solutions to occurring problems, and enhanced speed throughout the development and testing phases.

Latin American countries have a relatively small difference from US time zones, meaning you can check on a team or contact them to discuss project details during regular business hours. This allows your IT staff to establish a productive workflow and facilitates real-time collaboration between the in-house and remote development units.

Top Destinations for IT Outsourcing in Latin America 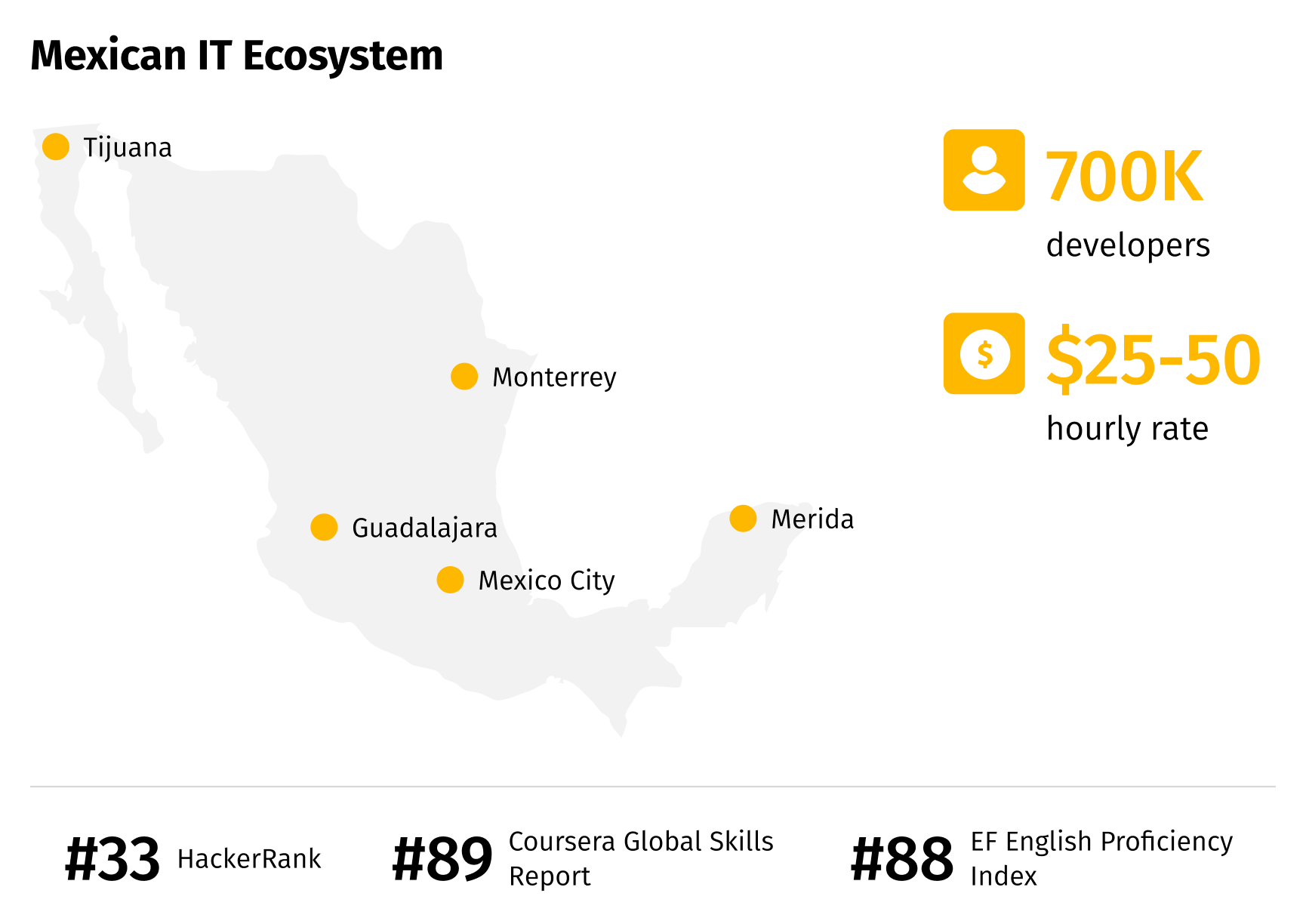 IT Outsourcing to Mexico

Outsourcing software development to Mexico isn’t new. The country has a long history as a leading nearshoring destination for North American companies, notably those specializing in telecom, fintech, and consumer products and services.

The country is on track to keep up with the rising demand for a qualified IT workforce. Several programs have been launched to draw students into higher education programs in IT. This ensures a strong flow of qualified graduates, with almost 114K aspiring software engineering professionals joining the market every year.

The country receives high praise from the global tech community for local developers’ impressive expertise. According to the latest SkillValue ranking, Mexico is #2 in the world in terms of tech skills. The country has also secured 33rd position on the HackerRank leaderboard, and it holds 63rd place on TopCoder’s list of the most first-place finishes in its coding challenges.

In addition to its superb developer track record, Mexico also takes pride in its IT outsourcing hotspots. The capital, Mexico City, boasts a massive talent pool of nearly 225K professionals and an innovative network of 385 tech startups, making it the largest tech hub in the country.

Guadalajara is another fast-growing metropolis known for its deep-tech infrastructure and growing population of professional software developers. The city is a landing portal for many international companies wishing to tap into the region’s outsourcing market. Such world-renowned tech giants as Oracle, Intel, HP, and IBM all have major R&D and programming facilities in Guadalajara, proving its tech credentials. 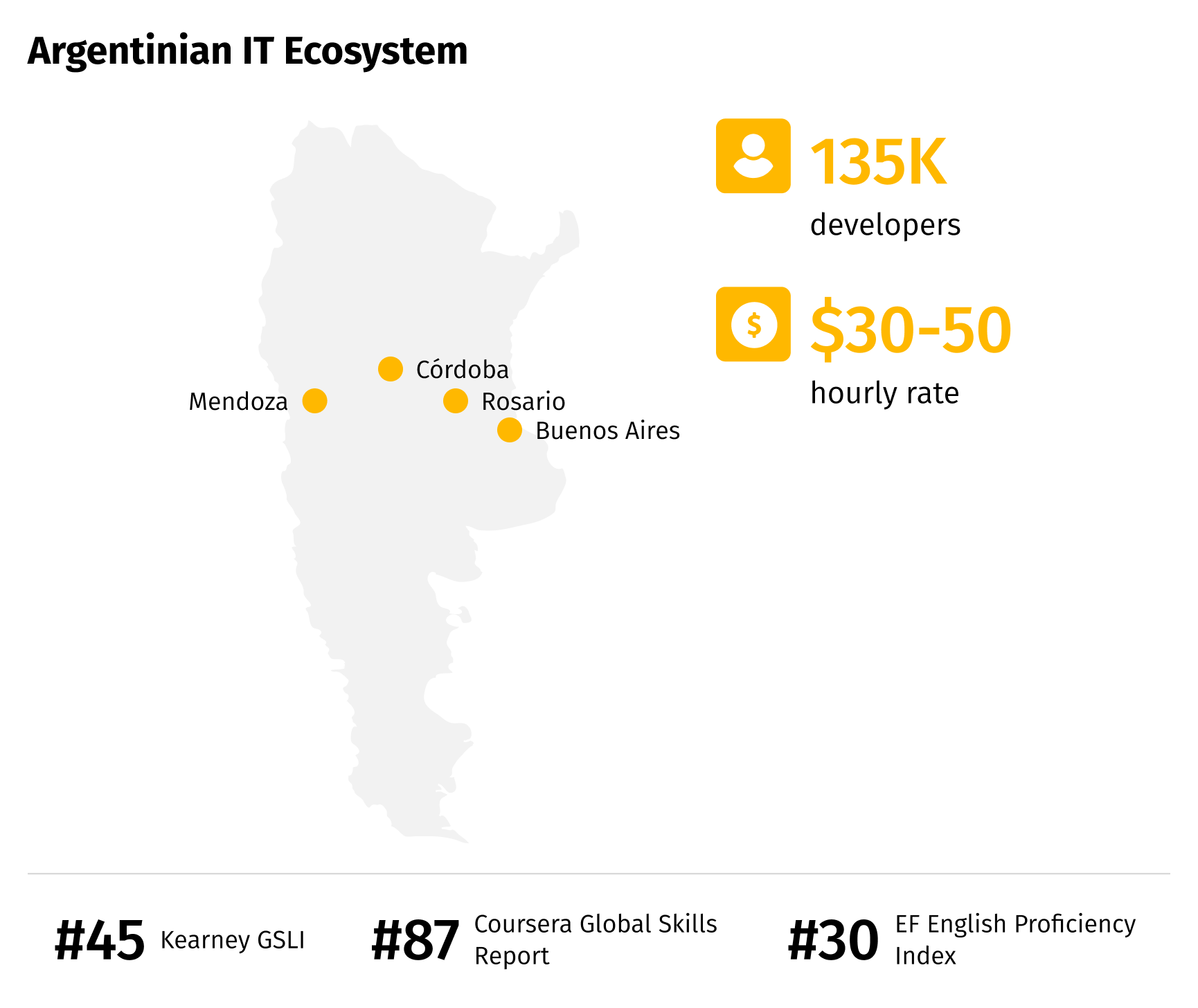 IT Outsourcing to Argentina

Argentina is a nearshoring star whose popularity has been on the rise since the dot-com boom. The country’s deep-rooted engineering culture and rich experience of working with Western countries make it one of the world’s top destinations for software outsourcing. With more than 15K local professionals serving offshore markets, this LatAm tech powerhouse has managed to draw the global community to its native talent.

Part of the picture that makes outsourcing to Argentina so attractive is state support. The government frequently passes laws to maintain a congenial economic climate and pique the interest of international companies.

Those efforts have already begun to bear fruit. In 2021, the country’s ICT market revenue stood at $10.1B. Over the next five years, the cumulative value generation opportunities for this sector are projected to reach $64.6B.

The government also devotes ample funding and resources to the creation and further development of computer education throughout all school programs. Thanks to these initiatives, Argentina can draw on a pool of 135K adept professionals specializing in software and mobile app development, cloud computing, data science, and DevOps.

Argentinians also score the highest in Latin America for English language skills. Since this makes communication and collaboration with Western partners much easier, it confers a tremendous strategic advantage, increasing their competitiveness on the regional tech scene.

IT Outsourcing to Brazil

Brazil is no stranger to the global tech community. The country currently holds 5th position in the Kearney GSLI. This ranking assesses countries’ capacity to deliver high-quality services, tracking their scores in financial attractiveness, people skills and availability, business environment, and the new digital resonance categories.

On the downside, average developer rates are higher than in other countries in the region, ranging between $25 and $80 per hour. Despite the higher price tag, outsourcing to Brazil remains a bargain compared to hiring in-house developers. Moving IT operations to this LatAm location allows North American companies to save up to 40%–60% of their development costs.

In 2022, Brazil exported about $3.9B worth of application outsourcing, web hosting, and information services. Although the country’s technology sector is relatively small, it has grown tremendously over the past few years. Foreign investment in Brazilian startups has more than doubled since 2016. The total volume of venture capital poured into the nation’s tech ecosystem now exceeds $3.5B.

São Paolo alone has attracted more startup investment than Chile, Colombia, Argentina, and Mexico combined and is quickly gaining prominence as the biggest tech hotspot in the region. It is currently ranked 6th in Tholons global network of digital hubs.

Other significant IT centers include Rio de Janeiro, Salvator, and Florianópolis. The latter is often dubbed “Brazil’s Silicon Valley” because of the number of universities, research institutes, and incubators producing talent, to supplement the country’s 500K digital community.

IT Outsourcing to Uruguay

Despite its relatively small size, Uruguay consistently punches above its weight. With a population of about 3.5M, it is the leading software exporter per capita in South America and the third highest worldwide. The IT industry accounts for 2.7% of the national GDP and is expected to earn $1.66B by the end of 2022.

One reason why so many international companies choose Uruguay as a place to develop their technological products is the 100% exemption from income tax on earnings from exporting software and related services. This government incentive has not only spurred the interest of US and Canadian businesses but also given rise to the emergence of local top-of-the-line tech companies.

Over the past couple of years, 700 software development firms have flourished throughout the country. Robust tech infrastructure is one of the key factors drawing newcomers. Due to the deployment of fixed broadband and the improvement of international connectivity with a submarine cable system, Uruguay boasts an Internet penetration rate of 83.4%. The country also leads in terms of 4G-LTE mobile communications and has recently launched its first 5G commercial mobile network.

The dense concentration of innovative startups, technological advancements, favorable government policies, and an advanced education system is an ideal environment for incubating talent. Nearly 11% of all Uruguayan students are enrolled in engineering degrees. Many begin working while still in college, giving them a head start in the job market. As a result, even tech giants such as IBM, Microsoft, Oracle, and Cognizant often hire junior developers directly from universities, fostering their professional development within the organization.

Latin America is one of the fastest growing technological powerhouses across the six largest geographies. It offers many elements Western companies are looking for when outsourcing, such as cost-effective rates, a highly tech-savvy workforce, tax benefits, great English skills, effective teamwork, and innovative thinking.

LatAm has everything it takes to deliver efficient, scalable, and fast results. For many foreign businesses, nearshoring to Latin America is the first step toward a successful project.

Grid Dynamics is a digital-native technology services provider with delivery centers all over the world, which empowers us to cater to the needs of any client, no matter where they are located. Our main tech hub in Latin America is in Guadalajara, Mexico.

The software engineers at Grid Dynamics’s Guadalajara engineering center are well-versed in a wide range of technology tools – from research and development to programming and design. The office has access to a vast talent pool of 78K IT professionals. Being situated in the Central Standard Time (CST) zone, the center enables convenient communication with clients based all over the US – from Atlanta to Seattle. 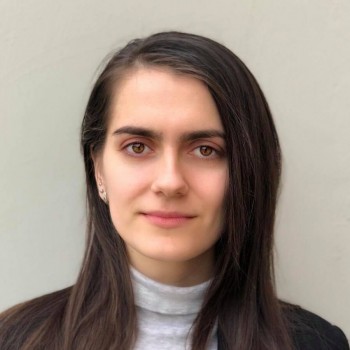 Alia Shkurdoda is a passionate content writer with several years of experience in the EdTech and IT outsourcing spheres.