Link copied to clipboard
Home Services Global Team Augmentation Blog Ukraine Where to Outsource in Ukraine: A Look at Lviv — A City of 21,500 Software Developers

Where to Outsource in Ukraine: A Look at Lviv — A City of 21,500 Software Developers

Why outsource in Lviv, Ukraine? Lviv is home to more than 461 tech companies and 26,500 tech workers, 80% of whom are software developers. With more than 4,000 graduates joining Lviv’s tech scene every year, Lviv’s IT outsource services sector makes up 14.4% of GDP, which is approximately $280 to $300 million. More impressively, Lviv is the only Ukrainian city to have officially declared the tech industry as one of the key elements in the city’s competitiveness strategy.

Still not impressed? Read on as we dig deeper into what makes Lviv an excellent destination to outsource your tech needs or to hire software developers in Ukraine.

Lviv is home to 26,500 out of more than 200,000 tech specialists in Ukraine. 80% of them are software developers and the remaining 20% occupy non-delivery or non-production positions.

Number of Software Developers in Lviv (IT Cluster) 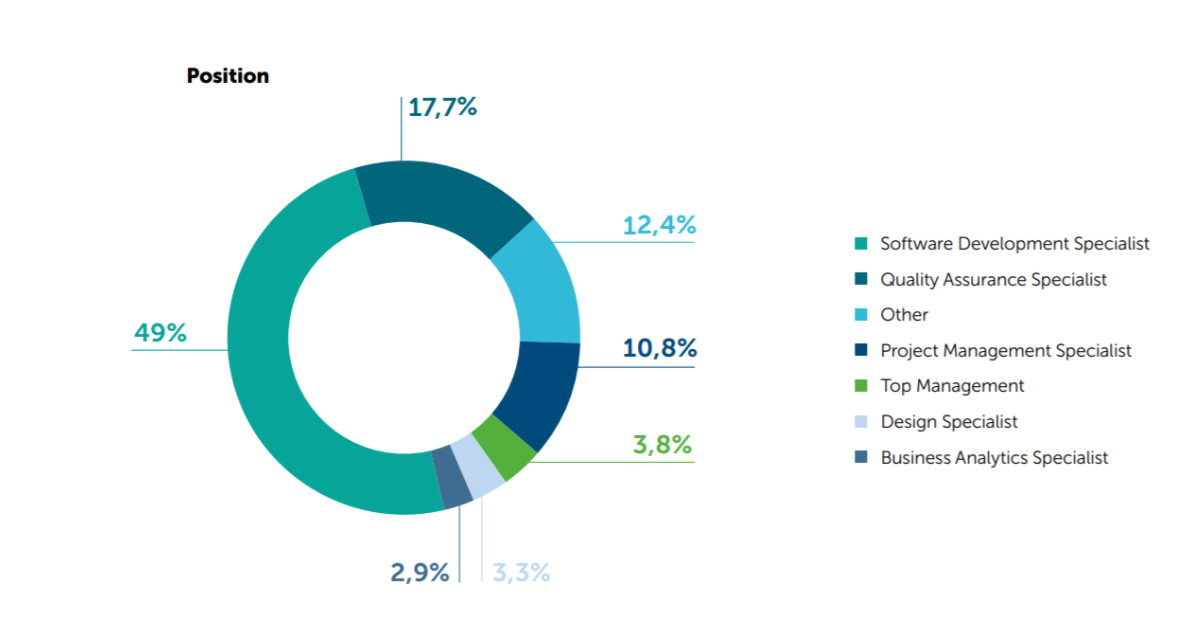 Positions of Tech Specialists and Software Developers in Lviv (IT Cluster)

A team of investors coupled with the IT Association gathered around the idea that Lviv needs one umbrella IT Park that would suit 10,000 tech specialists. On 10 ha, the IT Park will locate innumerate modern offices, a park zone, and an educational hub.

IT Park - Hub for IT outsourcing companies in Ukraine (source)

Tech companies in Lviv closely collaborate with higher education institutions to increase the quality of education. Thanks to active engagements, students can learn about the latest technologies from the city’s leading tech experts.

Or choose Lviv Polytechnic National University to learn about:

In addition to the city’s universities and academies, there are plenty of smaller IT schools that provide high-quality education in software development, QA engineering, system administration, UI/UX and graphic design, project management, and many other specializations. These include LITS, Logos IT Academy, ITEA, SkillUp, IT Step School, and other schools.

Additionally, some of the larger tech companies have opened their own IT schools, like SoftServe IT Academy, that help them train exactly the kind of professionals they need.

492+ IT Companies to Outsource to in Lviv, Including 20 Product Companies and International R&D Offices

You can outsource to 90% of Lviv’s IT outsourcing companies or hire software developers in Lviv through them. The majority of businesses that outsource to Lviv, Ukraine are located in North America (58%) and Europe (35%).

The remaining 10% consist of local and international product companies, including Siemens, Oracle, Gameloft, and TemplateMonster.

20% Annual Growth Rate of the Tech Industry in Lviv

According to the IT Research, the annual growth of the tech industry in Lviv has tripled in the last five years.

Ukrainian IT companies in Lviv generate between $658 and $718 million a year, creating additional workplaces in the adjacent industries.

With so many professionals living in the city, it’s only natural that Lviv has a vibrant, diverse, and welcoming tech community. Here are a few of Lviv’s largest and most prolific tech clubs and groups:

Lviv IT Cluster has brought together 100 companies that employ over 18,000 tech workers combined. The community actively promotes Lviv as a tech city on both the domestic and international level, supports local educational projects, and conducts regular research in the industry.

GDG Lviv is a community of developers who use Google technologies. They organize meetups and workshops in Android, Web, and Cloud development, as well as the annual GDG DevFest Ukraine conference.

Aside from developer groups, there are also dedicated communities for QA engineers, CEOs, tech recruiters, and even teenagers looking to make their first steps in the tech sector.

Tech Events That Make Lviv a Perfect Destination to Outsource to

Lviv hosts a great number of tech events and conferences for a wide range of specialists. Here are some of the largest:

Lviv IT Arena, which takes place every autumn, is one of the most prominent IT events in Ukraine. The conference brings together over 2,500 developers, designers, top managers, entrepreneurs, business analysts, and startup founders.

IT — Synergy. IT Business & IT Education is the largest IT education conference in Ukraine that has been conducted for 7 years in a row. In 2020, the conference gathered 43 speakers and more than 1,189 attendants who tuned in on and offline.

GDG DevFest Ukraine is the largest conference in Central Europe dedicated exclusively to Google technologies. The next GDG DevFest will take place in April and is expected to attract more than 700+ participants as well as multiple international speakers.

GameDev Conference is the largest game event in Western Ukraine. The name says it all: the conference is for everyone interested in games, their development, and their promotion.

There’s no shortage of convenient business centers in Lviv, but if you don’t feel the need to invest in your own office space right now, there are more than enough excellent coworking spaces that will provide you and your local team with all the necessary infrastructure. Here’s our selection of top locations:

Geographical and Cultural Proximity of Software Developers in Lviv

Among the many reasons to hire software developers in Lviv in particular and Ukraine in general, cultural compatibility is definitely one of the most significant ones. In terms of working practice, Ukraine’s tech industry is very similar to that in the Western business world.

This is especially true in Lviv, from both a historical and geographical perspective. Throughout most of its 765-year history, Lviv has been part of Poland, Hungary, and Austria. Today, the city is less than 100 km away from the Polish border.

A 1 to 3 hour flight from Lviv can take you to multiple cities in Germany, Poland, Austria, Italy, Lithuania, Israel, Turkey, and further, with more international connections launching all the time.

Add in the lower tech salaries and cost of living in Lviv to the mix, and you get an excellent destination for starting your own tech business.

Grid Dynamics Will Help You Hire Software Developers in Lviv

Grid Dynamics is expanding its presence in Lviv. Our recruiters will help you find the right software engineers and other tech specialists for your projects.

Feel free to share your requirements with our sales representatives, and we’ll do our best to help you get a strong team from Lviv.

Software Development Companies in Ukraine: Exploring the Trends Within the Largest European IT Market