What Should You Know About the Engineering Talent Shortage in Israel?

The IT talent shortage in the software development industry in Israel is expected to reach 15,000 open positions. About 31% of open positions are predicted in product and infrastructure roles, followed by positions requiring the knowledge of data science, machine learning, and artificial intelligence says a study by Start-Up Nation Central and the Israel Innovation Authority. In fact, Israel’s experience is part of the global talent shortage trend that all major tech nations know too well.

How do tech companies try to tackle the talent shortage in Israel? The study also says that about 22% of responding companies have established a significant presence in Eastern Europe during the last two years. About 95% of all respondents have opened R&D offices abroad, 25% have hired tech talents abroad, and about 45% of all of them are claiming to delegate IT outsourcing to Ukraine. 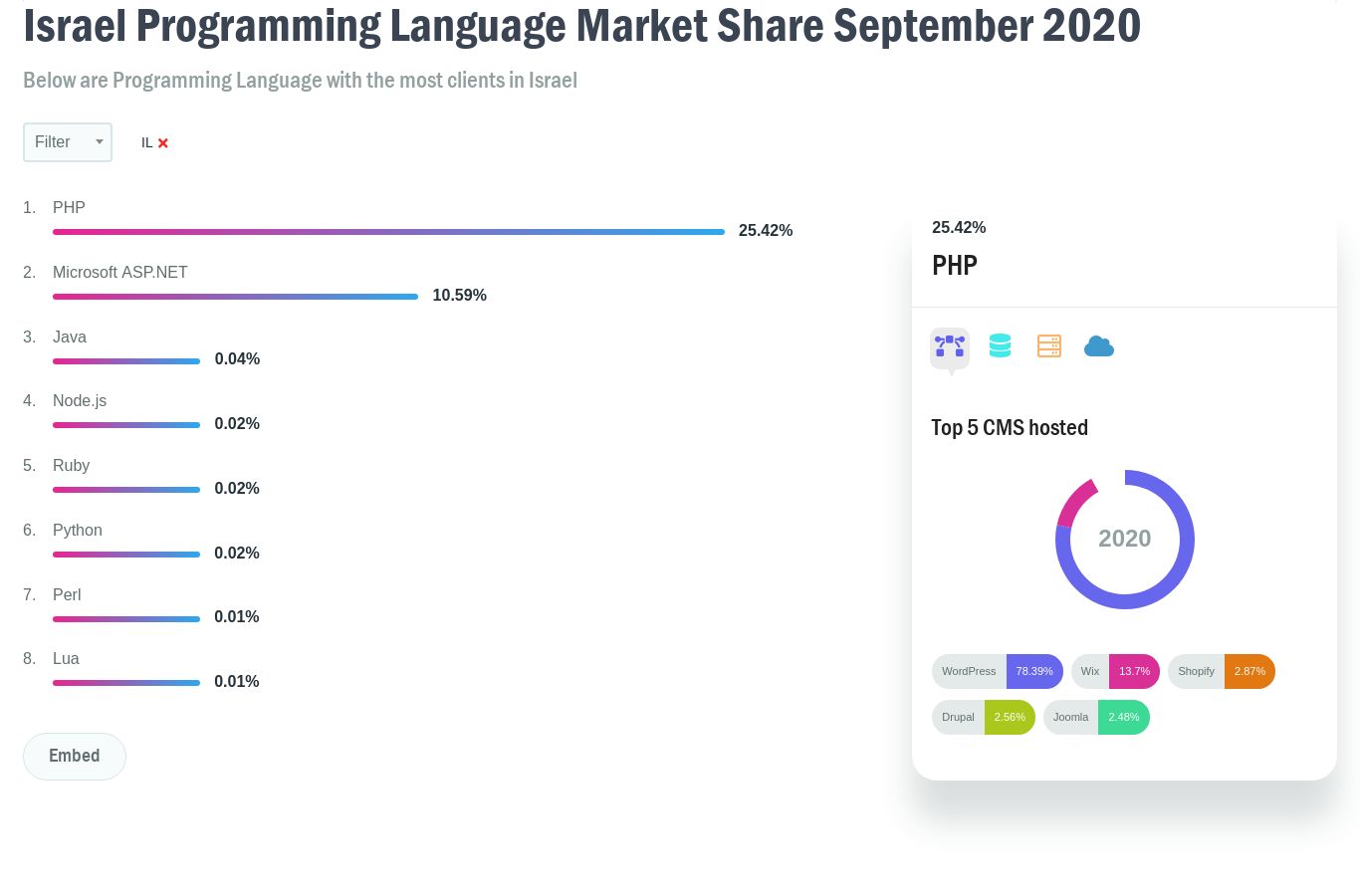 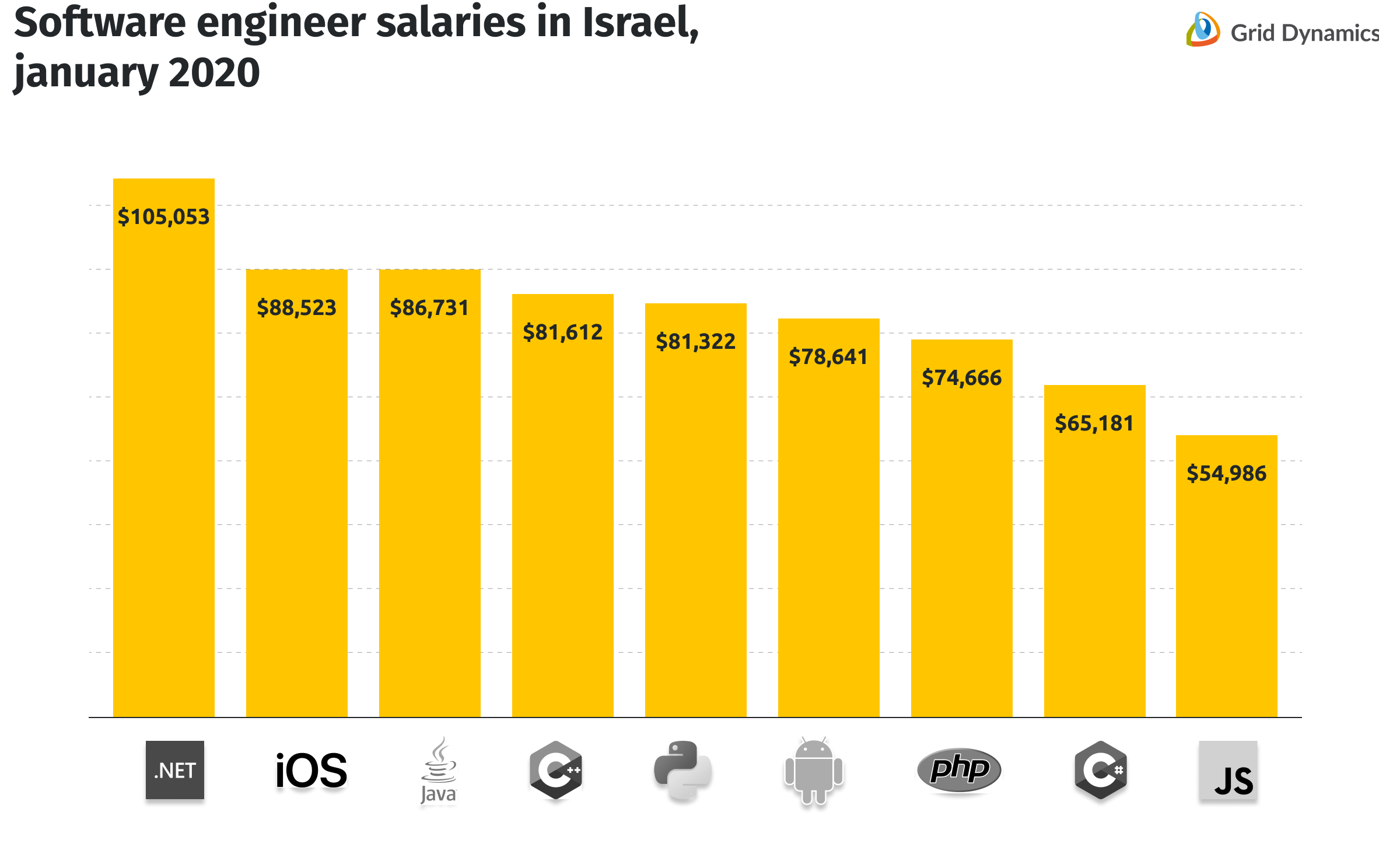 What Is the Average Software Developer Salary Around the World in 2020?

What Is the Software Developer Salary in Israel Depending on the Programming Language in 2020?

Israel is inhabited by large multinational companies such as Amazon, Facebook, IBM, Intel, Microsoft, and about 300 others. Not only do they monopolize the market by buying out Israeli startups, they also set salary bars very high. Large companies offer salaries that are twice or even thrice higher than the market average, hence leaving the rest no other options than to seek alternative hiring destinations outside of Israel.

The majority of Israeli clients have a tendency to improve and maintain old legacy digital solutions written on PHP and Java. Yet, unicorns and SMEs are more prone to using JavaScript, Java, and Python. 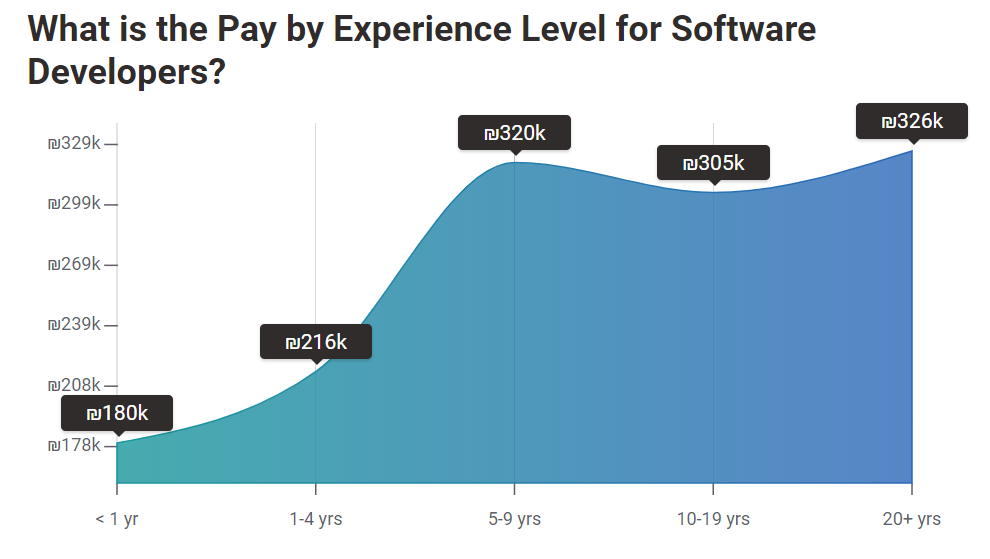 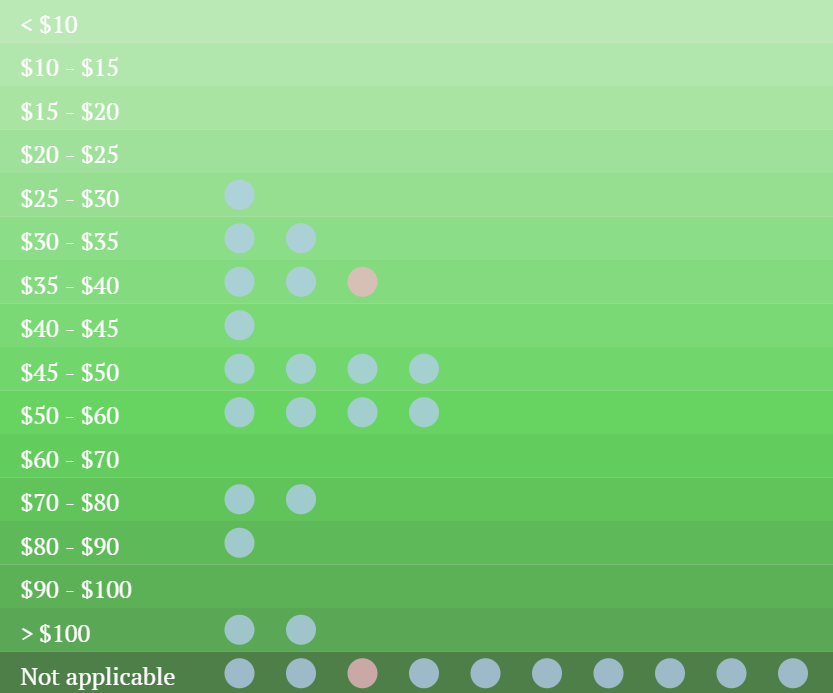 What Is the Number of Software Developers in Israel?

Our custom research showed a low presence of Israeli programmers on professional social media platforms such as LinkedIn. We found only 169,000 software developer profiles located in Israel. The largest number of software developers, specifically 1,200 of them, indicate JavaScript as their major programming language. .NET follows with 474 programmers, and C# and PHP come next with 237 and 200 programmers respectively.

The freelance software development market in Israel, based on our Upwork research, is experiencing a downfall. Only 500 programmers were available for hire. The majority of freelance programmers in Israel registered on Upwork indicated JavaScript as their major technology.

Tech business owners and the government alike set up initiatives aimed at increasing the number of software developers in Israel. According to Co-General Manager at Start-Up Nation Central Uri Gabai, Israel is now creating a multi-fold plan for solving the talent shortage. In his interview for Jerusalem Post, he says that the government plans to double the number of tech specialists by “helping pay for coding schools that do intensive training for six to nine months.” However, business owners feel more pessimistic and consider this increase in software developer count in Israel insufficient for keeping the tech industry growing.

What Are the Average Rates of Software Developers in Israel?

With us, you can assemble a team of developers and manage it directly. We’ll provide a comfortable working environment for the developers you hire with us, take care of paperwork, and make sure you retain the programmers in your team with the help of a dedicated HR Client Partner.

After two months of an unsuccessful search for talent on the Israeli tech talent market, Liad Guez, Oktopost Co-Founder and VP Product, came to Grid Dynamics with a request to find additional developers for his team.

Grid Dynamics proved to be very professional. The staff was very responsive and knew how to explain the market specifics and recruitment processes. We also liked the transparency of all procedures.

Read the full version of our interview with Liad here.

Windup: What’s Up With the Talent Shortage in Israel?

The tech talent shortage in Israel is caused by the presence of large tech companies and a growing number of tech startups that can’t be staffed with local tech talent alone. This tendency pushes tech businesses to offer inflated salaries in an attempt to compete with tech giants who, besides paying double or triple salaries, offer compelling social packages and benefits. Given the circumstances, company owners tend to outsource software development to offshore locations and hire developers in Ukraine and other Eastern European countries. Statistically, every fourth tech company In Israel works with an overseas tech vendor. Opening an R&D office abroad is one of the most popular approaches to filling talent gaps among tech business owners in Israel.

Are You Ready to Hire a Dedicated Development Team? Skyrocket Your Journey with This Easy Roadmap