59% of global companies hire offshore programmers to optimize software development costs. And while offshore developer rates vary from country to country, you can still save from 40% to 70% of total costs. For example, an average hourly rate for a senior developer in the US is $65–$130 per hour while in Ukraine it's around $30–$60 per hour. Offshore software development rates in Latin America range from $35 to $70; in Eastern Europe, an hour of developer’s work will cost $30–65; the average rates of offshore developers in Asia and Africa are $20–45. 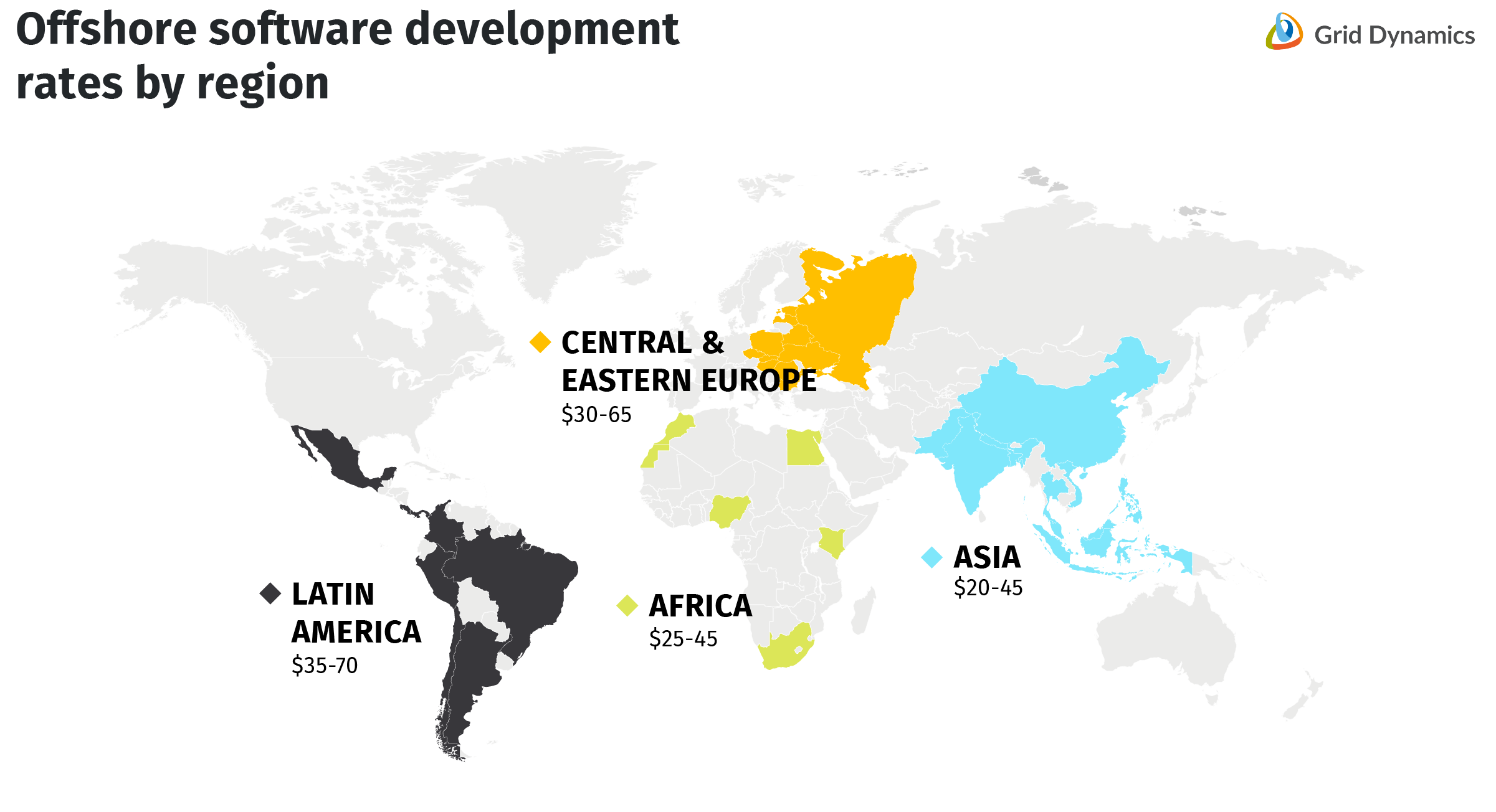 The offshore software development rates comparison provided below is a rough guideline as they ignore the differences between various cooperation models. To find out more accurate outsourcing rates by country, you’ll need to communicate with vendors directly.

On average, a median Ukrainian developer hourly rate is $30–$60.

Ukraine continues to be a hotbed of growth and a sweet spot for software development outsourcing offering the best price to quality ratio.

Hiring a programmer in Brazil will cost you around $15–$60 per hour . The range varies depending on the city, years of experience and skill set. However, based on our research, you will have to pay $15+ to a junior software engineer in Brazil, while a senior programmer will cost you up to $60. That said, the average hourly rate in Brazil ranges between $35–$50 which means that average day rate in Brazil is around $280–$400.

Argentina is a popular outsourcing destination thanks to it little time difference with the US clients and considerable average rates ranging from $35 to $50 per hour. Junior software engineers expect the lowest hourly rate starting from $13 per hour, while senior programmers expect to be paid around $42–$50 per hour.

Along with India, China is of the most affordable countries to outsource software development to. While the average hourly rates are $19–$38, junior developers can be hired for as low as $12 per hour while seniors may want as much as $40 per hour for their job.

Egypt, Nigeria and Tunisia are emerging African giants for sourcing potential of software professionals. Moreover, Egypt tech talent market offers affordable rates for software engineering service. The average medium hourly rate ranges from $25 to $45. Junior developers can be hired at $18+ per hour and senior developers will cost you around $33–$50 per hour.

South Africa offers the highest offhsore IT rates in Africa. The medium hourly rates range between $25–$45. Choosing to outsource to South Africa will cost you from $21 per hour for a junior developer to $52 for a senior specialist. 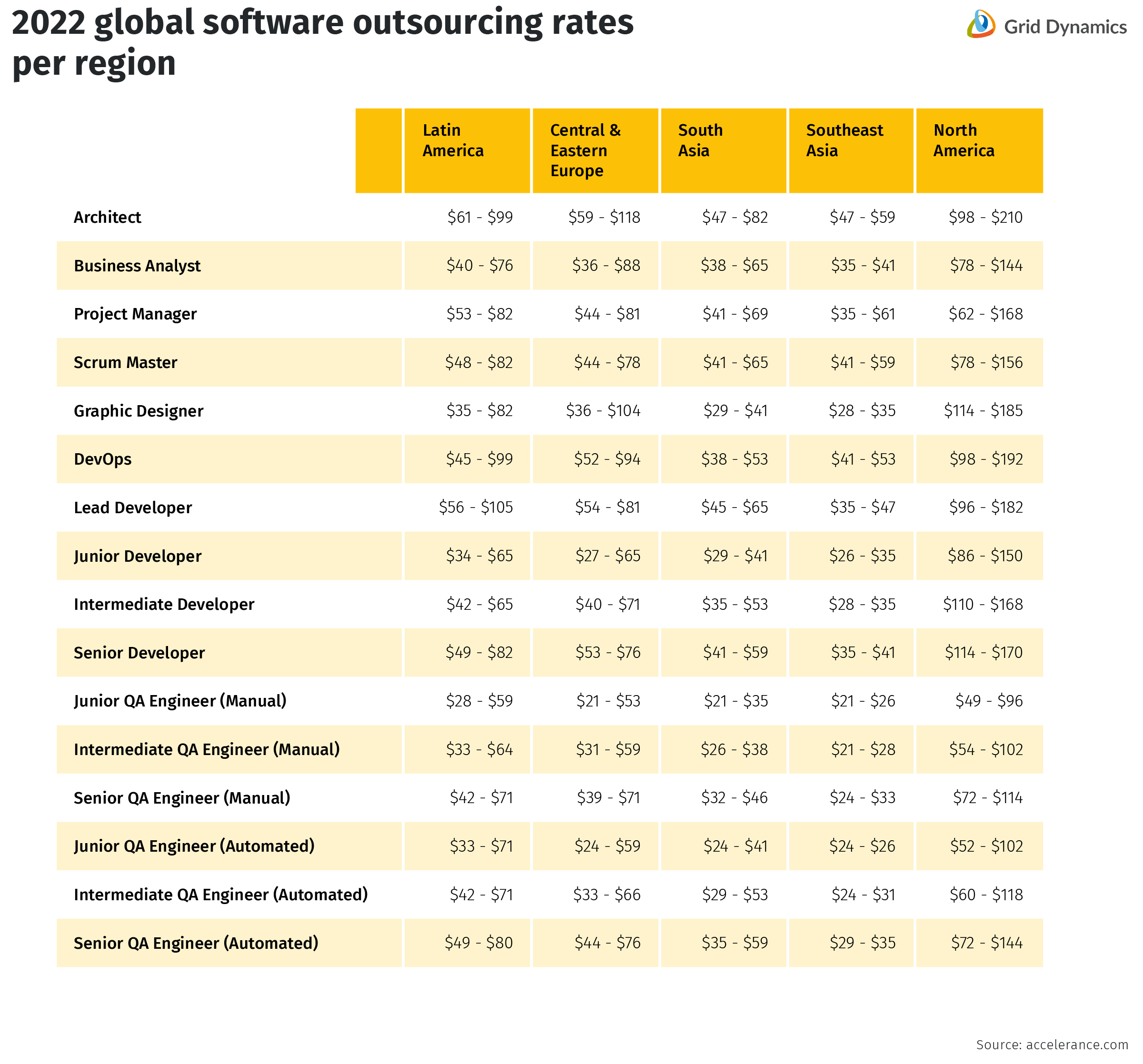 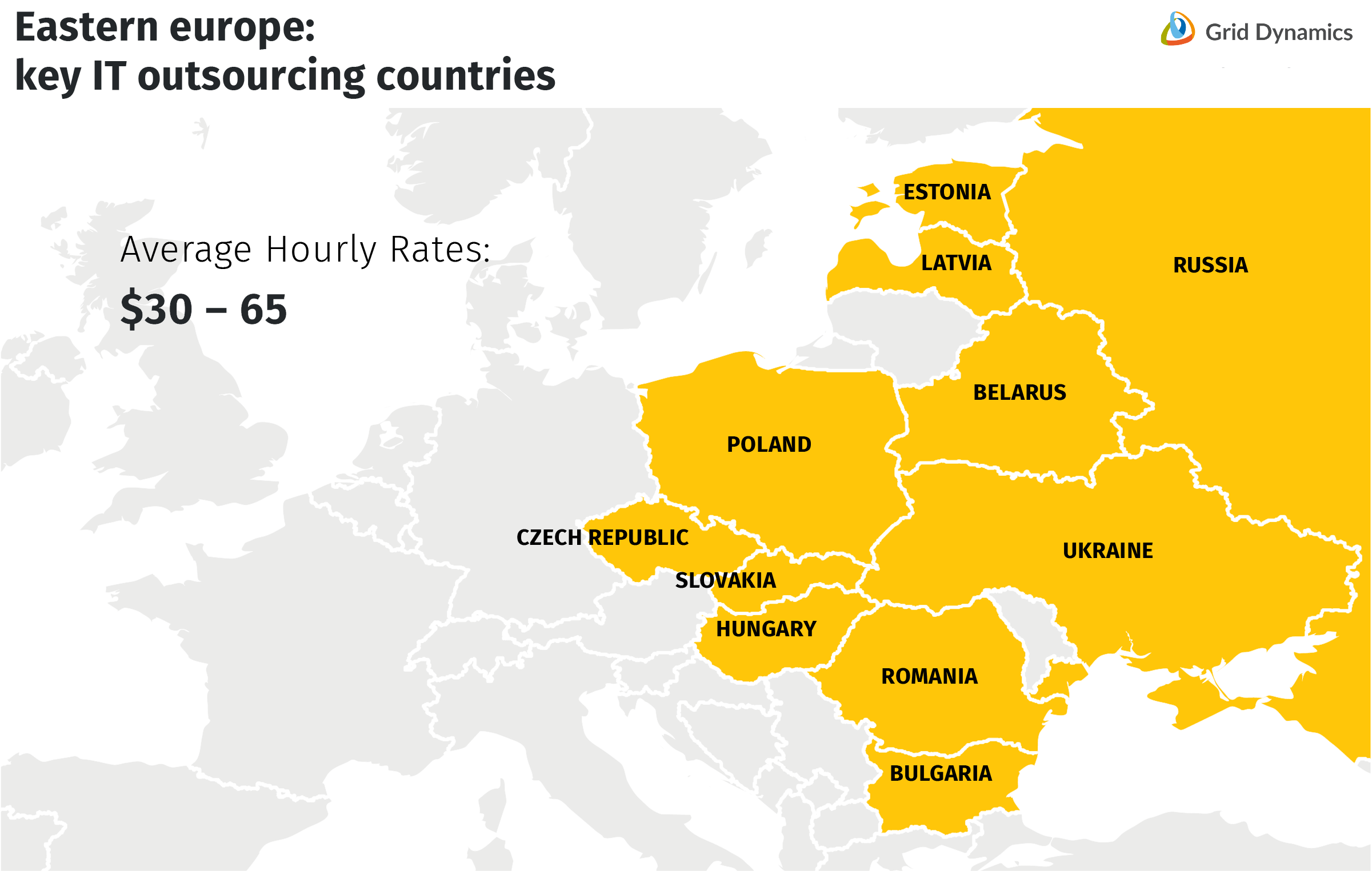 About 450 technical universities and favorable business conditions stimulate the industry’s prosperity. Ukraine is among the fastest-developing countries in the region. In 2020, Ukrainian tech market reached 200K software specialists.

Ukraine's liberal outsourcing rates and 250,000 programmers make it one of the biggest IT nations in Eastern Europe, second only to Poland with 400K software developers. 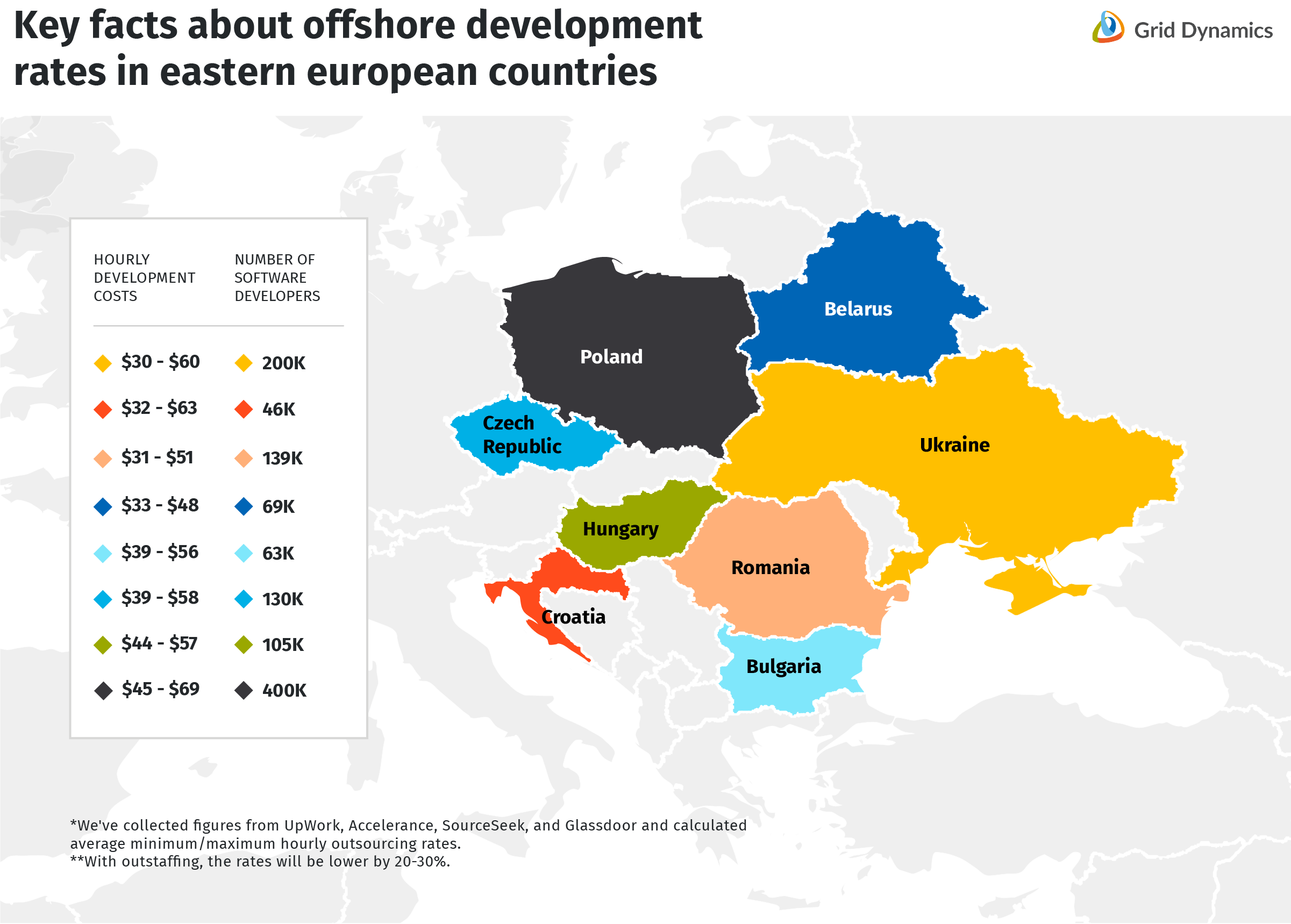 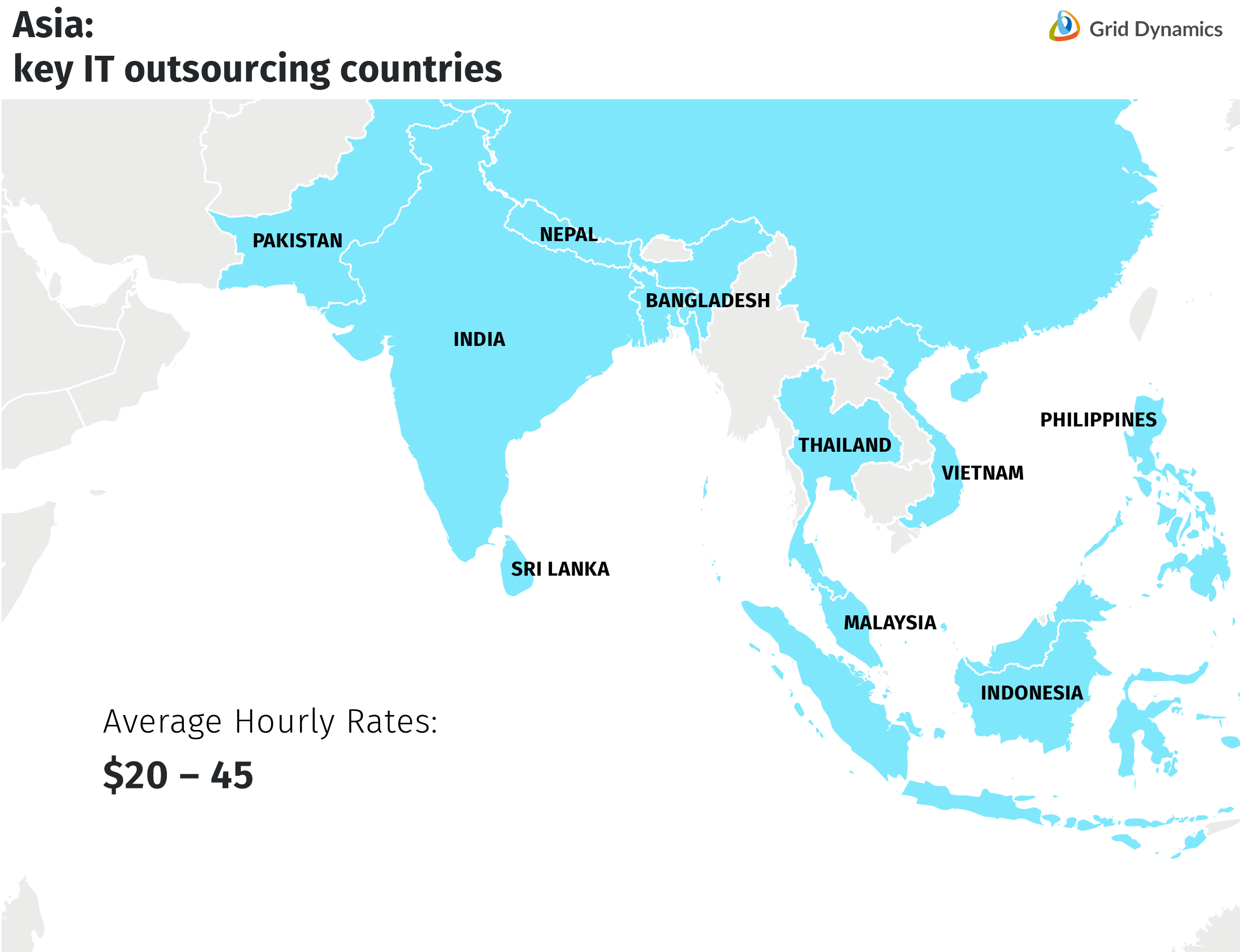 China and India are the main Asian tech hubs with a large number of software engineers — there are nearly 5 million overseas developers in each country. Other countries in Asia, such as Vietnam, Malaysia and Indonesia, are also gaining ground and offer similar software development services.

Low offshore software development rates in Asian countries often come at the cost of poorer project quality. Adverse work conditions, cultural differences, and disparities in time zones have a negative cumulative effect on the correspondence and result in decreased quality.

Asia boasts a vast tech talent pool — more than 10 million developers. The offshore developer rates in Asia are shaped by various aspects and can differ a lot from country to country. 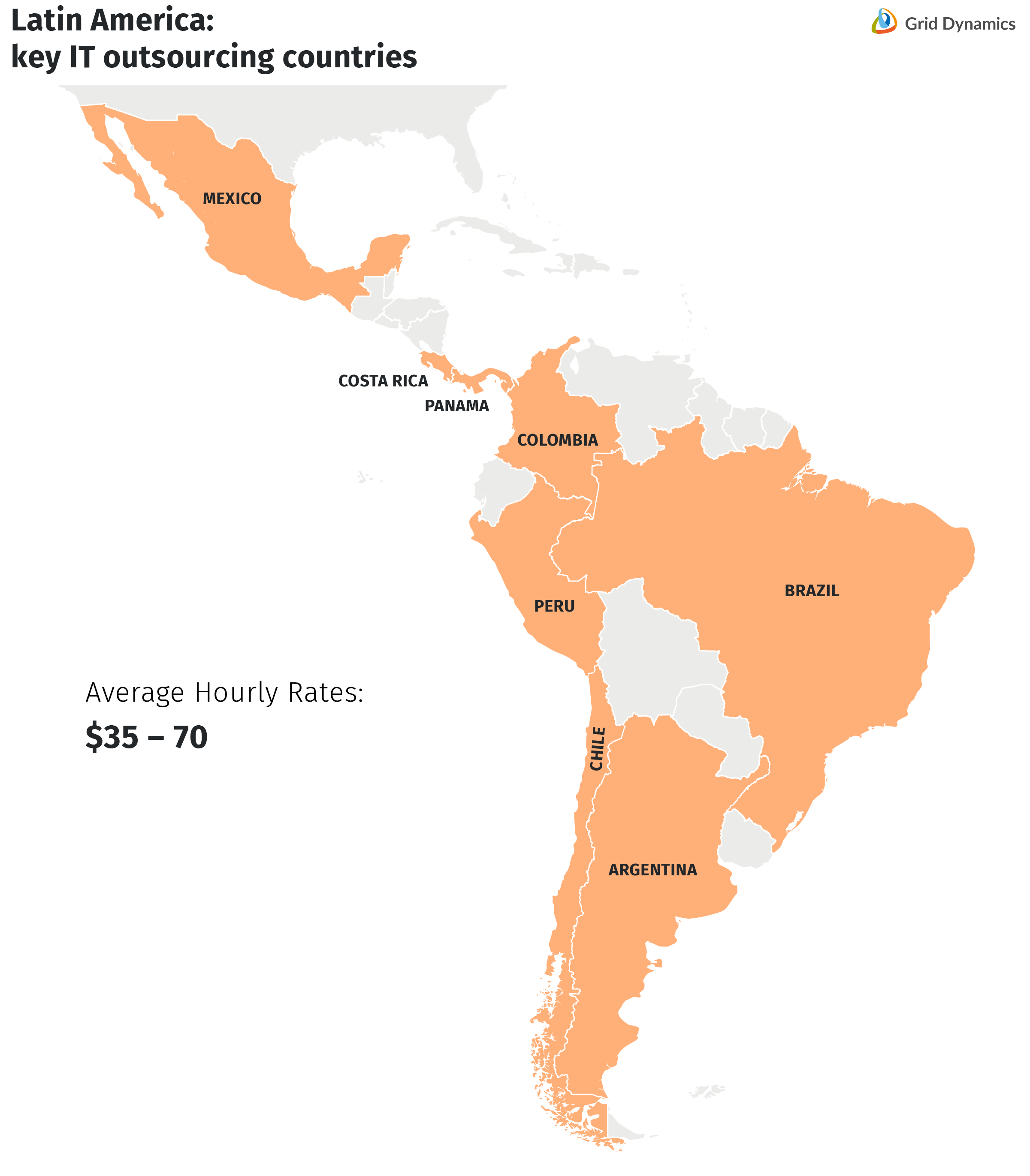 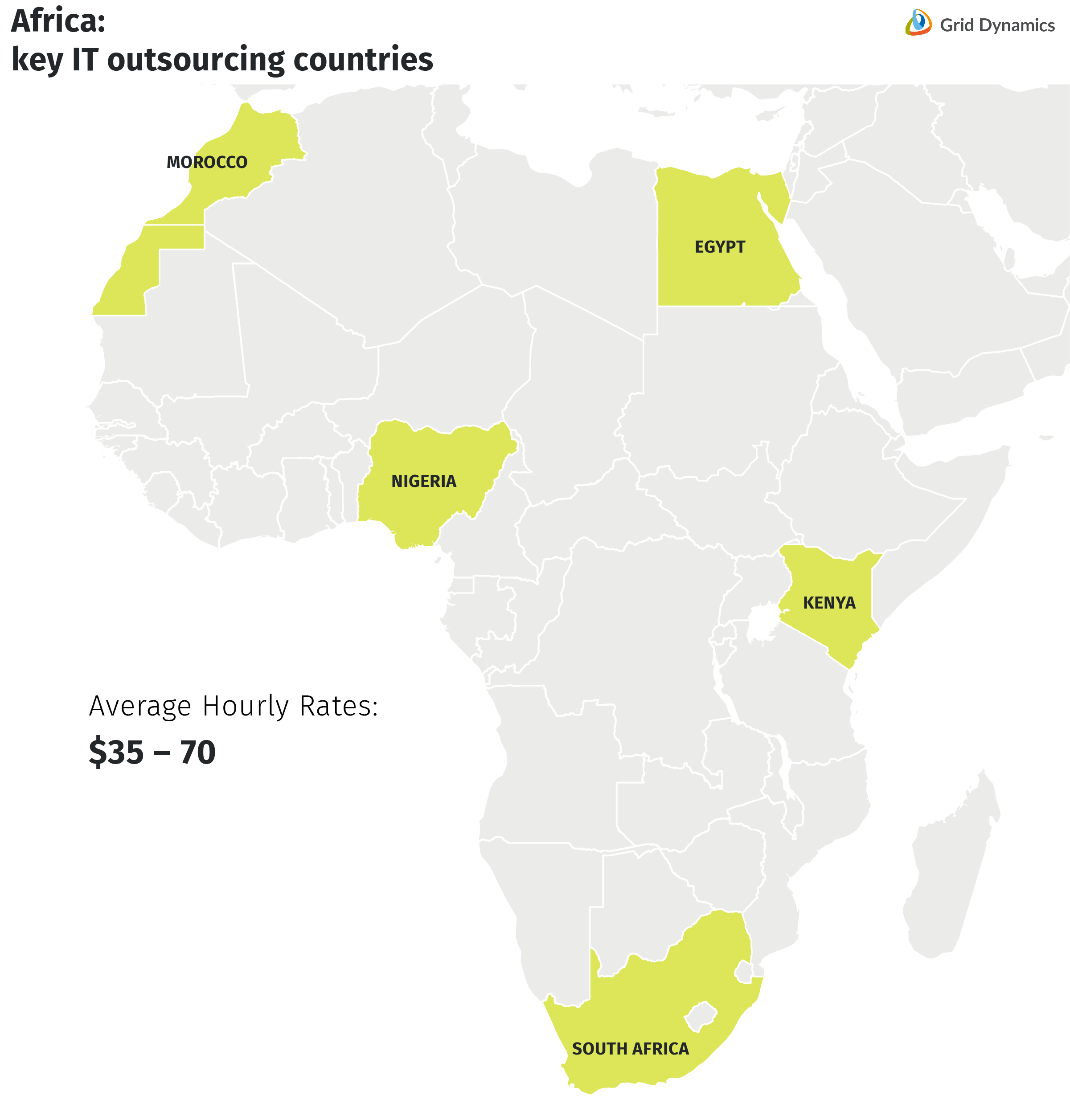 Why Is Ukraine the Best Offshore Development Destination?

Ukraine is a great country to hire an offshore developer for several reasons. The main benefit of hiring offshore developers in Ukraine is that you’ll have access to the second biggest tech talent pool in Eastern Europe. Among other benefits are the speed of hiring and the lower cost of developer attraction. Sink your teeth in our guide to outsourcing to Ukraine to get even more useful insights.

Grid Dynamics is a technology consulting service provider. Grid Dynamics has 15+ years of experience in a digital transformation of Fortune-1000 US enterprises to create innovative products and experiences. Our distributed teams workflow has been tested in 6+ years period in collaboration with businesses from all over the world. Recognized as a leader among mid-size Agile developers in 2019 by Forrester. With us, you can get an entire cross-functional dedicated team or pod teams to get your deliverables on time.

We have offices in Eastern Europe, Central Europe, and Latin America — the largest tech hubs. Each developer you hire with us works full-time on your project.

Don’t know where to start?
Contact us
faq
What are Offshore Developer rates by Country?

What is the Ukrainian developer’s hourly rate?

Is development outsourcing a good thing for business?

59% of global companies hire offshore programmers to optimize software development costs. And while offshore developer rates vary from country to country, you can still save from 40% to 70% of total costs.

Python Developer Salary in the US and World in 2021 | Why Is Python Programming So Popular?