Outsourcing software development to Eastern Europe is a workable solution for 40% of leaders who continue to experience talent scarcity in IT. According to Clutch there are over 2500 IT outsourcing companies in Eastern Europe with a tech talent pool of 1,3M developers. And this is no surprise that tech giants like Apple, Google, Microsoft and IBM opened their branches in the region.

Benefits of IT Outsourcing to Eastern Europe

Business owners offshore IT to Eastern Europe, because the region is rich in innovative specialists in different industries. While Eastern European software developers have achieved great results and are renowned around the world for their high-quality work, the economies of their countries still lag behind. 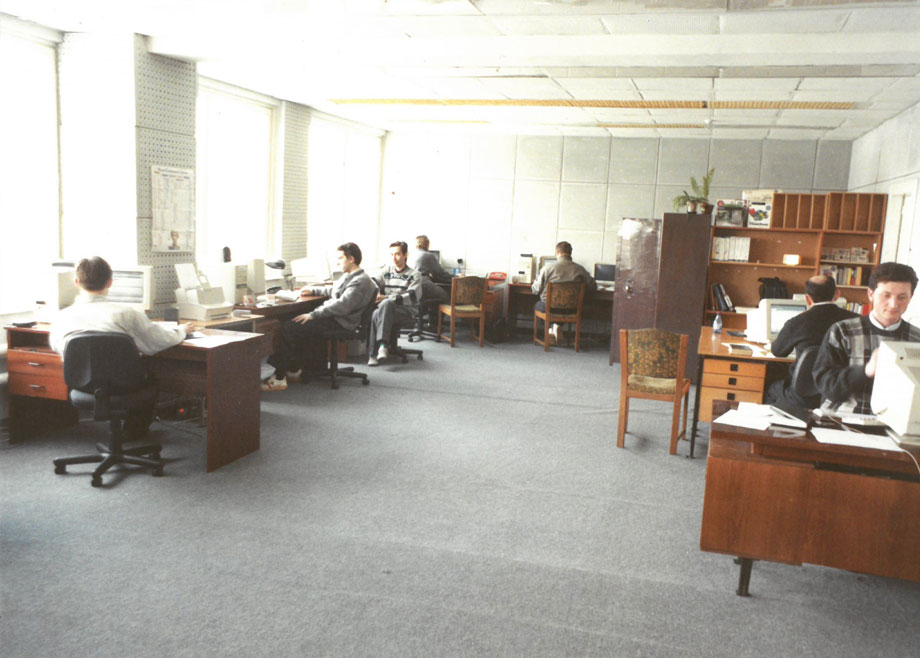 And reasonable rates aren’t the only benefit that attracts business owners to hire developers in Ukraine, Belarus, Poland, and other Eastern European locations. 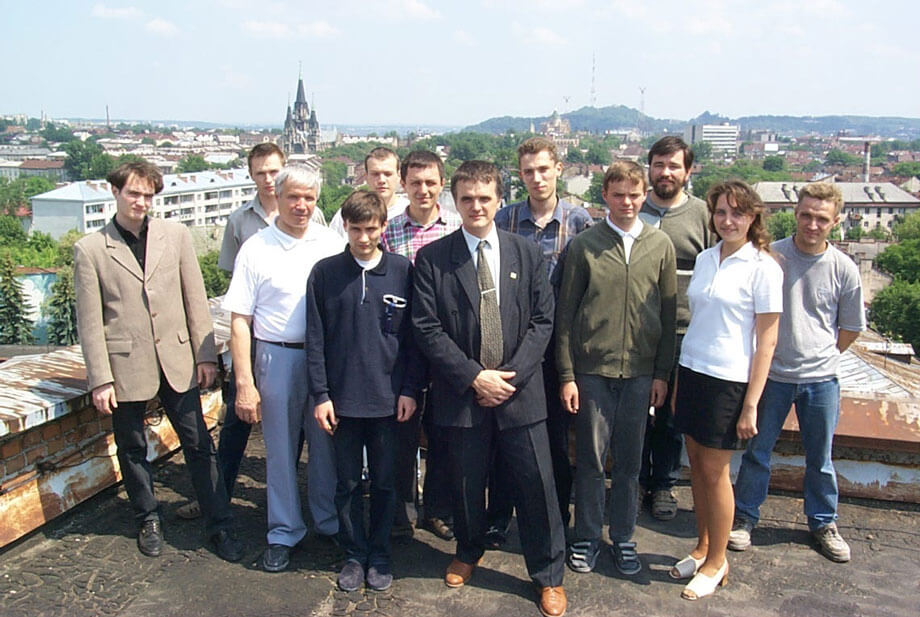 Here are five reasons to outsource your IT functions to Eastern Europe:

IT Outsourcing to Ukraine, the Country with Wealth of Talent 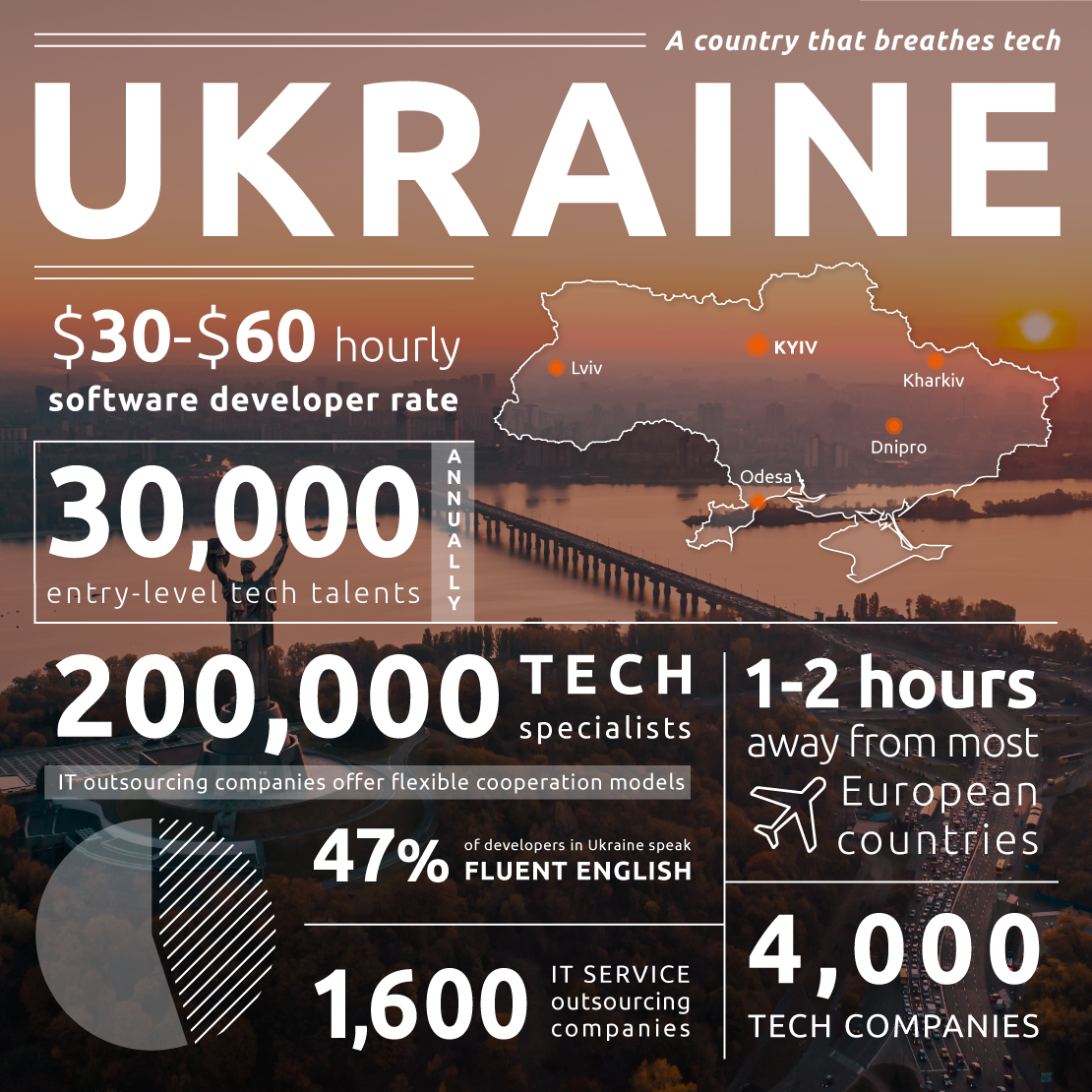 IT Outsourcing to Ukraine

Ukraine’s IT outsourcing industry remains one of the most competitive in Eastern Europe because of its strong talent component — now there are around 200K software developers in Ukraine, 110+ R&D centers of international companies, and more than 4K tech companies.

According to studies from Gartner and the A.T. Kearney Global Services Location Index, Ukraine has one of the largest outsourcing markets in Eastern Europe.

The Ukrainian IT industry comprises around 5% of the country's total GDP and is a leading sector in the economy. Tech exports now surpass the country's wheat exports, which reached $3.65 billion during the previous year.

There are around 200K Ukrainian developers, 54% of whom are currently employed in outsourcing and outstaffing companies, while 28% work in product companies.

67% of all IT professionals in Ukraine are located in Kyiv, Kharkiv, and Lviv — the largest Ukrainian IT hubs. 37% of developers work in Kyiv region, 15% in Lviv region, 14% in Kharkiv region, and 8% in Dnipropetrovsk region.

Annually, Kyiv and other major Ukrainian tech cities hold 1000+ IT events which present plenty of opportunities to exchange innovative tech ideas and share professional knowledge. Among the most popular events are: Outsource People, Lviv IT Arena, ITEM, and Mobile Beach Conference.

According to lonelyplanet.com, the average daily budget needed for staying in Ukraine ranges from $20 to $75. This sum covers a room with breakfast in a good hotel, a three-course dinner in a nice restaurant, and transit costs.

To put this into perspective, a similar experience in Poland would cost you $60–$90 per day. This means you can visit your offshore development team as often as you wish while investing minimal efforts and costs.

Concerning tech salaries, the average monthly programmer salary in Ukraine ranges between $2K and $5K per month. Depending on the developer's specialization and seniority level, their annual income varies between $24K and $72K.

Find more information about the average software developer salary in Ukraine in a related article:

They only contribute 5% of their revenue and a unified social tax, calculated as 22% of the minimal salary in Ukraine, which currently makes around $40. What’s more, many Ukrainian banks offer special service terms for tech specialists.

Read more about how much it costs to hire developers in Eastern Europe vs. other regions:

Citizens of the EU and the US don’t need a visa to travel to Ukraine. However, the stay is limited to 90 days within a 180-day period.

Since 2017, Ukrainians have also been able to travel visa-free to the Schengen Area. As for 2020, Ukrainian citizens can visit 128 countries, 92 being totally visa-free, while the rest require visitors to pass online registration beforehand or get a visa on arrival.

Why Build a Nearshore Software Development Team in Eastern Europe with Us?

You're the one to choose, hire, and manage your remote development team with the tools and methods you love. You can hire a cross-functional team from the get-go (but you can start from a lower number of developers and don't commit to full 10-20 talent team) — it's up to you.

Besides, Grid Dynamics has a well-developed set of other services. They include dedicated teams, pod teams, and offshore development centers.

77% of German and 66% of Dutch businesses choose outsourcing software development to Eastern Europe according to Grid Dynamics's own research.

A country-based analysis shows that Ukraine is the most popular nearshore programming destination among German companies — 17% of business owners have opted for Ukraine. 12% of German companies outsource to India, 10% to Romania, 9% to Poland, and 4% to Belarus. 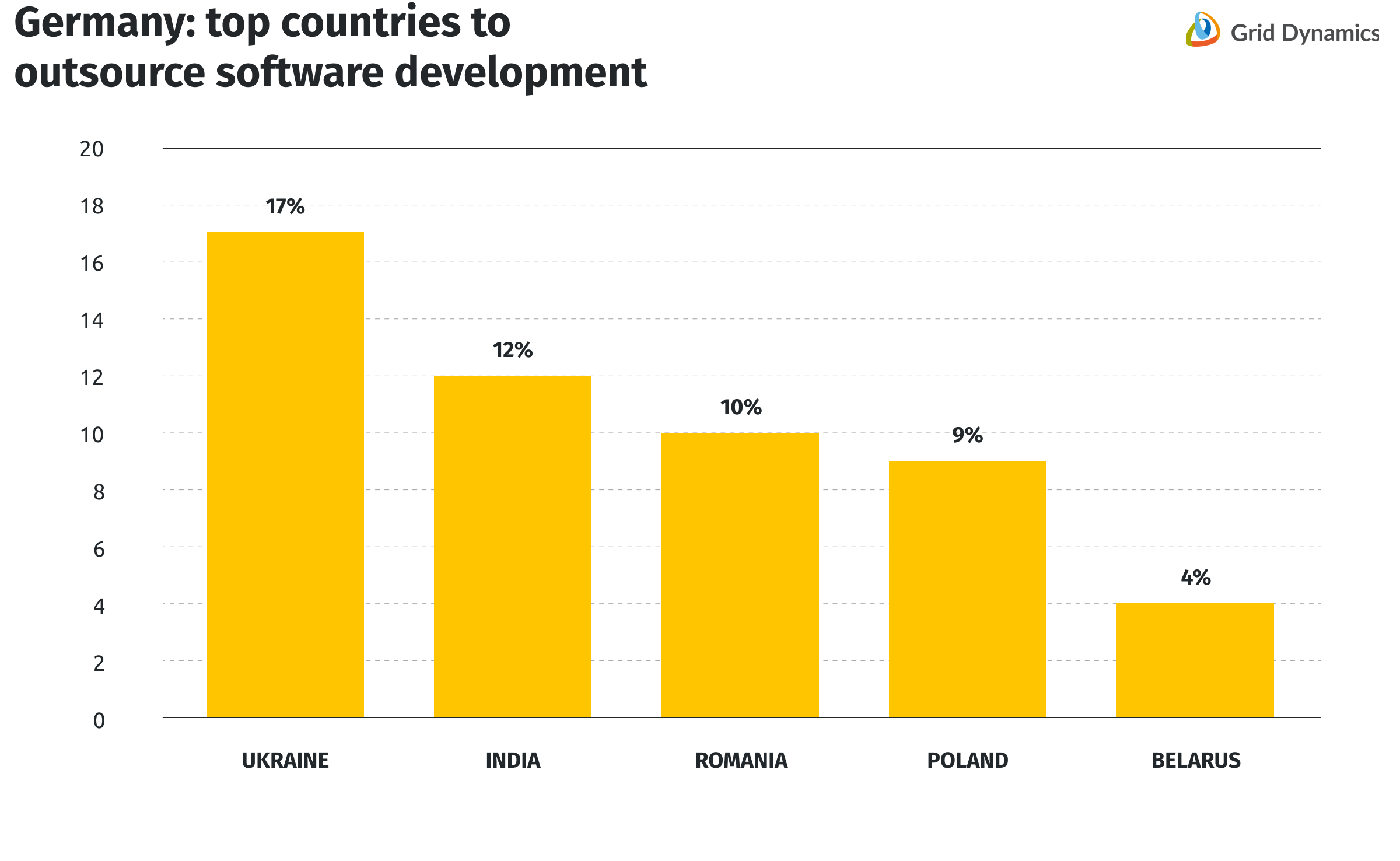 Among Dutch companies, 18% outsource to India, 14% outsource software development to Ukraine. The rest of Dutch businesses also hire teams in Eastern Europe — 9% to Poland, 9% to Romania, and 5% to Belarus. 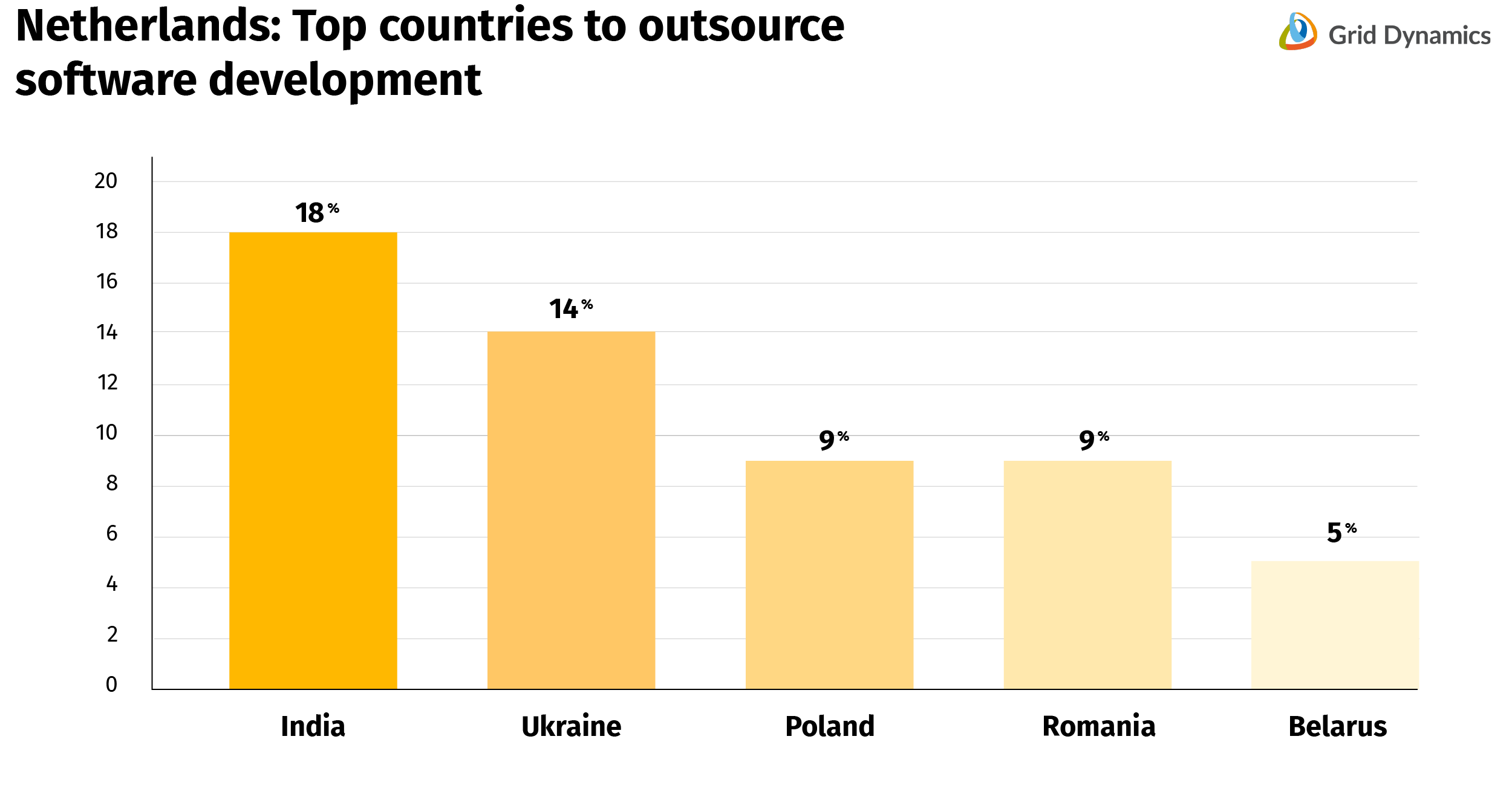 Find out more about Dutch and German nearshore programming choices in our research:

Other Popular IT Outsourcing Countries in Eastern Europe

IT Outsourcing to Poland

Most of the tech sector income in Poland comes from computer equipment sales, IT services, and software distribution. It’s expected that the revenue from the industry will reach $13 billion by the end of 2022.

The tech market grows consistently by 5–10% per year. The Polish IT sector accounts for 3.3% of the country's GDP, a number that is forecasted to reach 3.5% by 2021.
Poland has a wide tech talent pool with 8 developers per 1000 citizens, adding about 80K tech graduates annually.

IT Outsourcing to Bulgaria

The tech market in Bulgaria is also a leading tax payer — 1.3% of all funds in the economy come from the IT sector. Bulgarian IT companies spend on average 0.7% of their revenue on taxes.

The majority of tech companies in Bulgaria are owned by local businessmen, while the rest are outsourcing partners that are mainly based in Western Europe.

IT Outsourcing to Czech Republic

The IT exports in the Czech Republic have already reached $1.78 billion. No wonder Czechia is 27th out of 82 countries by the overall tech capacity.

The Czech Republic is among the top 20 countries that strongly invest in the development of the tech sector. Total funds make 2% of the country's GDP, surpassing such tech giants as Canada and the UK.

IT Outsourcing to Romania

It’s forecasted that the worth of the Romanian tech market will grow by 10% by the end of 2020. As for now, the country's IT market totals €1 billion.

The average year-on-year growth of the Romanian IT sector has been 15% since 2000. This means that the tech industry is becoming the core contributor to the country's GDP.

The Romanian government fosters the development of the IT infrastructure. So far, 70% of the market is under the control of foreign investors, allowing local companies to earn €50 million annually.

Besides, the tech talent pool is constantly growing — there are around 7K tech graduates entering the Romanian IT market every year. Concerning density, there are 6 programmers per 1000 citizens in Romania.

IT Outsourcing to Hungary

The lion's share of the Hungarian tech sector is composed of foreign businesses having their R&D centers or remote teams in the country. Thus, 66% of the IT revenue comes from those international companies, which are mainly located in the US, the UK, and Germany.

The value of ICT grows continuously, adding between 6–8% annually. The revenue of the Hungarian tech market is expected to reach $2.8 billion in 2021.

The Hungarian tech talent pool keeps growing — there are around 20K tech students graduating from ICT colleges and universities every year. There are 9 developers per 1000 citizens in Hungary.

IT Outsourcing to Belarus

Due to the vast number of foreign businesses establishing their dedicated development teams in Eastern Europe, the Belarusian IT industry's contribution to the country’s GDP is constantly growing and is expected to reach 4–5% by the end of 2020. Though 90% of the tech market in Belarus is strongly tied with exports, governmental support promotes further development of the market.

For example, the Hi-Tech Park state initiative is a system created to help tech professionals and businesses. Resident companies enjoy versatile benefits of governmental support: they’re released from most of the taxes, with income and value-added taxes among them.

Apart from that, the number of software developers in Belarus keeps increasing — there are 13K tech graduates annually. In terms of density, there are 6 programmers per 1000 residents in Belarus.

IT Outsourcing to Croatia

The tech industry in Croatia makes around €3.5 billion yearly. The government sees the necessity to further develop the tech industry, thus it has introduced e-Schools projects to integrate information technology studies into early education.

Another state initiative, the eGovernment, proves that the country strives for practical use of technologies, ensuring transparency of the public sector. The eGovernment provides over 40 governmental services online.

The Croatian tech talent pool adds 4K tech graduates annually. At the moment, there are 9 programmers per 1000 citizens in the country.

How Many Software Developers Are in the US and the World? [Updated]