Are you looking to hire front-end developers? We get tech businesses proper tech expertise with top front-end developers. We can help you hire JavaScript, React, Angular, or Node developers and set up reliable web development teams in our offices or in the online delivery infrastructure.

Scaling of Your Existing Product

Depending on your business needs, Grid Dynamics will rebuild some of the features, develop new functionality, and optimize your existing application/website. Grid Dynamics developers have all the necessary expertise and experience to provide you with up-to-date market-based solutions.

Continuous Support of Your Product

Grid Dynamics Front-end developers will provide all-around support to your code and ensure a positive end-user experience. Even if your product is working well, you need to make sure it is up and running and update it when needed.

We have access to the following markets: Eastern Europe, Central Europe and Latin America. Wide range of technologies, including HTML5, CSS3, JavaScript, Node.js, and AngularJS. We select Front-end web developers that fit your requirements best, and then they get fast onboarding on a project as a remote web development team to start delivering business KPIs.

No set-up and back-office hassle

We provide your Front-end developers with a comfortable, fully-equipped workspace and workstations. We also deal with the administrative hassle so that nothing distracts from getting the work done.

Support at every step

We don’t leave you when the team is all set. We help you establish effective cooperation and use various employee retention techniques to ensure team loyalty.

When you work with Grid Dynamics, you don’t need to rent more office space and hire additional staff as your business grows, which gives you more financial flexibility and allows you to increase your profit margins.

Grid Dynamics has 15+ years of experience in the digital transformation of Fortune-1000 US enterprises to create innovative products and experiences. Our distributed teams workflow has been tested in 6+ years period in collaboration with businesses from all over the world. Recognized as a leader among mid-size Agile developers in 2019 by Forrester.

I'm looking to find a team in short terms. Can you help?

What if I want to scale a team to 15 people?

We want developers with Agile experience. Do you do that?

Opportunity to Build a Team

We offer compliance and security of office and home environments trusted by Fortune-500 US companies so front-end developers and you as a client can focus on productive cooperation.

Hiring developers with a team augmentation partner like Grid Dynamics fits small, medium, and large companies that are looking to build a long-term remote team. Front-end developers will be a smooth extension of your local team.

Large and medium businesses with highly predictable requirements can benefit from using our project-based services (either short-term or long-term ones).

Collaboration with developer hiring platforms like freelance platforms (Freelancer, Upwork), job boards (Stackoverflow, Github), and matching services (TopTal, Gun.io) will fit businesses that don't have software development at the core of their activities and operate a limited budget.

With Grid Dynamics as a partner, you'll either have a collocated or distributed front-end team. It will depend on the distribution of the rest of your team.

If you opt for collaboration with such developer hiring platforms as freelance platforms (Freelancer, Upwork), matching services (TopTal, Gun.io), and job boards (Stackoverflow, Github) your team will be dispersed.

Learn How to Hire Front-End Developers in a Few Steps.

Step 1: Find the Best Front-End Developers in the World

With more businesses going online and creating an even greater demand for software engineers, the number of developers is predicted to reach 45 million by 2030, according to SlashData. 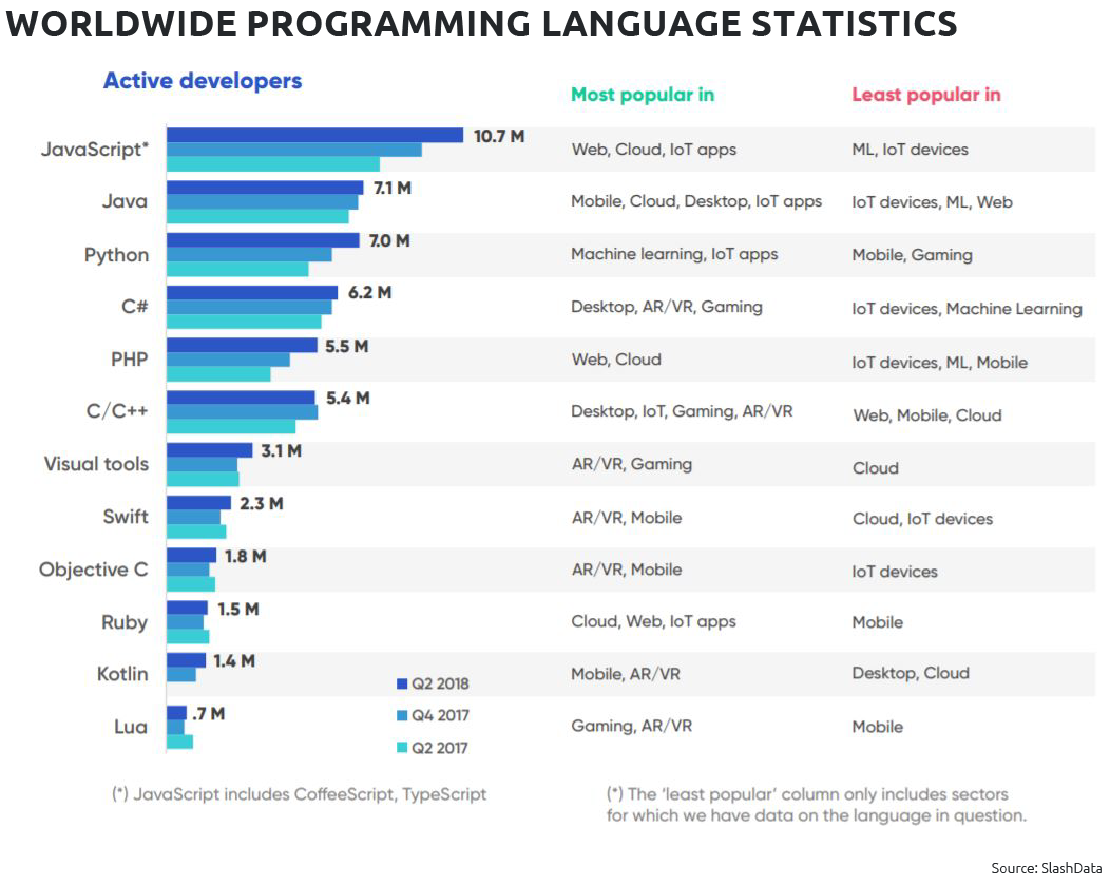 Programming Language Statistics in the World by SlashData

How Many Front-End Developers Are There in the World?

JavaScript and front-end have become synonymous ever since company owners worldwide started digitizing their businesses. The most recent research by SlashData showed that in 2018, the JavaScript community counted 10.7 million developers and showed promise of even greater growth in the nearest future.

How Many Front-End Developers Are There in the United States?

Our LinkedIn-based research showed that the US has the biggest number of front-end developers — about 12 000 LinkedIn users indicated JavaScript as their primary technology.

About 8 000 programmers in the US have more than 4 years of experience and make up the largest senior front-end developer group in the world.

There are almost 3 000 middle JavaScript programmers and 2 000 junior JavaScript developers in the United States.

In 2017, the US became the most powerful tech nation in the world. With an estimated 4.2 million people working in the tech industry and 3.4 million of them writing code, the country is also one of the world’s biggest outsourcers.

What Is the Number of Front-End Developers in European Countries?

How Much Does It Cost to Hire Front-End Developers?

Research by Accelerance and PayScale informs that the average front-end developer salary in the world ranges from $31 000 to $100 000 and above depending on the country and level of expertise.

Average Front-End Developer Salary in the US 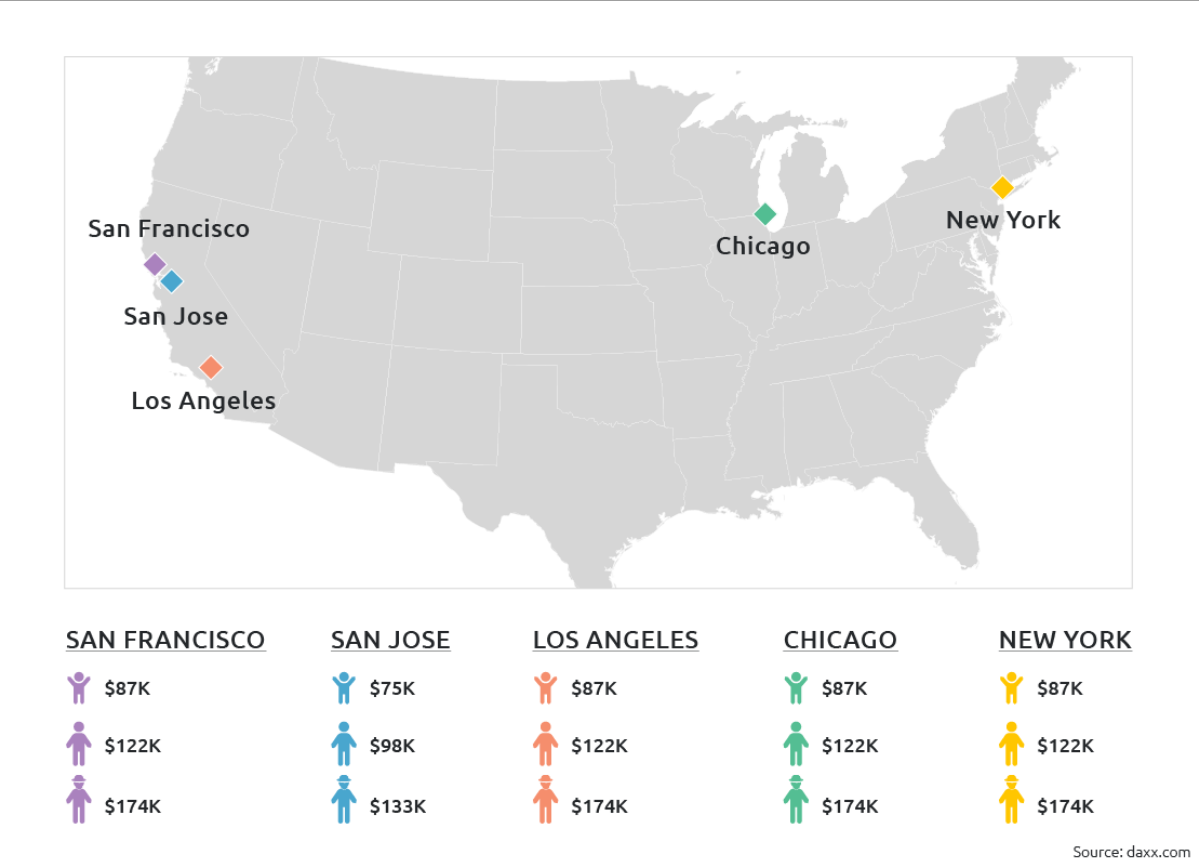 Average Salary of a Front-End Developer in the World

Depending on the city, a front-end developer in the US can earn from $75 000 to $174 000 a year. The lowest salaries for junior as well as for middle and senior front-end developers are seen in San Jose. The rest of the cities — San Francisco, Los Angeles, Chicago, and New York — offer similar salaries.

Grid Dynamics has 15+ years of experience in a digital transformation of Fortune-1000 US enterprises to create innovative products and experiences. Our distributed teams workflow has been tested in 6+ years period in collaboration with businesses from all over the world. Recognized as a leader among mid-size Agile developers in 2019 by Forrester.

We provide an effective onboarding process, initiate regular performance reviews, and create a productive working environment where everyone feels included. From day one, the engineers you hire with us become part of our retention process, so you can rest assured that your specialists are taken care of and satisfied with their work life.